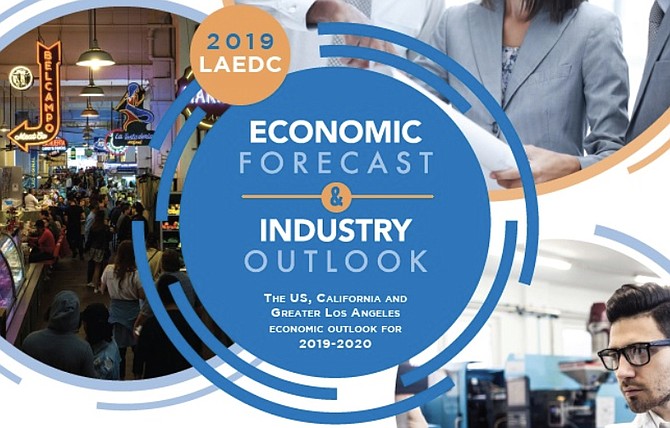 The county’s unemployment rate is forecast to drop slightly from an average of 4.6 percent last year to 4.4 percent this year and 4.3 percent next year, according to the forecast that was unveiled at the LAEDC’s annual forecast event at the Omni Los Angeles Hotel at California Plaza in downtown. Roughly 60,000 jobs are forecast to be added to employer payrolls each of the next two years, for a year-over-year growth rate of 1.3 percent. That growth rate is down from nearly 2 percent in 2016.

“Our job growth has slowed down since we’re at full employment now,” said Somjita Mitra, senior economist with the LAEDC and director of the nonprofit’s Institute of Applied Economics. “Most everyone who wants a job has one. Businesses that are looking to acquire talent must look harder now and pay higher wages, so they’re also more cautious in their hiring decisions.”

Mitra added the county’s unemployment rate will remain higher than the statewide and national averages, which has been the historical norm for major urban centers such as Los Angeles.

The forecast calls for the county’s total economic output, or gross domestic product, to grow 3 percent this year, about in line with the statewide average, but higher than the national average.

And personal income growth is expected to come in around 2.6 percent, lagging slightly the statewide average. Mitra said the slightly higher unemployment rate is a factor behind this lag. Total real per capita income is projected to reach $46,500 by 2020, up from $44,700 last year.

The forecast also cites the region’s expensive housing and the homeless crisis as major obstacles to longer-term economic growth, calling the lack of affordable housing “the greatest long-term threat to economic mobility and bottom-up prosperity.”