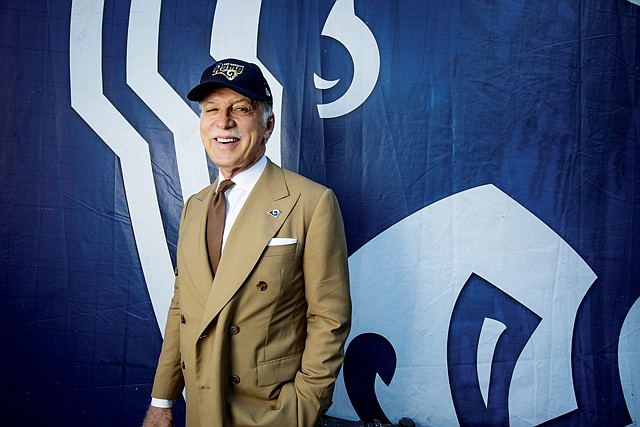 The Los Angeles Rams came away losers in Super Bowl LIII, falling to the New England Patriots 13 to 3.

But at least the team raked in money from the two weeks of hype driven by advertisers and corporate partners looking to capture the attention of the game’s 100 million viewers, right?

Actually, no. At least not from the ticket and merchandise sales or advertising spend directly related to the game.

“Of the revenue generated by the Super Bowl, nothing goes straight to the team itself,” said Victor Matheson, an economist at Holy Cross University.

Added Rick Burton, a sports management professor at Syracuse University: “The NFL is the most socialistic of sports.”

The Rams counter that, perhaps long term, their Super Bowl run will be of financial benefit.

“We’re focused on building a long-term brand,” said Jamie Reigle, the Rams’ executive vice president of business operations. “The question is how we can leverage this run for long-term gain.”

The National Football League shares equally among its teams the money TV networks pay to air games, which is the league’s biggest revenue source.

Revenue from sales of merchandise, from replica jerseys to bumper stickers, is also split.

For example, the Rams boasted that in the 10 days after they qualified for the Super Bowl, the team sold $3.5 million worth of merchandise.

But almost all of that money goes straight to the NFL to be divided up among the league’s 32 teams.

Super Bowl ticket sales are also split – the Rams and Patriots do not get a bigger ticket revenue cut than, for example, the teams they beat on their way to the Super Bowl.

Team ownership and management do not, though, get a financial award.

Like revenue, the league partly controls expenses. Each team has the same cap – it was $177.2 million last year – on what they can spend on player salaries.

The Green Bay Packers, who play in the league’s smallest market, are the lone NFL team that is a publicly traded corporation and so must disclose financials.

The Packers’ most recent annual report listed $441 million in 2017 operating revenue, with $244 million coming from the money split among all NFL teams, and $197 million from local revenue.

Learning to love the Rams

There are two main sources of football teams’ local revenue, Matheson said − money from the team’s venue, including ticket sales, and money from sponsors.

Sixty percent of ticket sale money goes to the home team, with the other 40 percent split evenly among the league’s other teams.

The Rams have played in the Los Angeles Memorial Coliseum since moving back to Los Angeles in 2016 and will host games there for one more season until moving to a new, team-owned venue in Inglewood.

The Rams ranked 10th in attendance for the past regular season among the 32 NFL teams, but also finished 2nd in most empty seats during games, selling just 77 percent of available tickets.

“It’s a pretty rare phenomenon that we have a team good enough to make the Super Bowl but can fill up only 77 percent of their seats,” Matheson said. “The vast majority of teams are selling between 90 and 100 percent of their available tickets.”

The Super Bowl run could increase ticket demand, said David Carter, executive director of the sports institute at USC’s Marshall School of Business, and perhaps lead to a ticket price hike. Both developments would lead to more revenue for the team, but there’s some need for caution on that front.

“The Rams need to be careful, however, because large increases in ticket prices, especially in their final year playing at the Coliseum, may not be worth the bad PR heading into the new stadium,” Carter said.

Tickets are not yet on sale for the upcoming 2019 season, Reigle, of the Rams said, and there are no plans to raise prices.

Personal seat licenses, in which fans pay between $1,000 to $100,000 for the right to have first dibs on season ticket sales, have been on sale for the new Inglewood stadium since March, Reigle said.

He declined to say how many of these licenses have been sold or whether the playoff run sparked sales.

Reigle would not specify sponsorship terms; outside economists speculated top sponsors pay a few million dollars each per year.

But he said each are “multiyear partnerships” the team cannot renegotiate based on its on-field success.

The team has not signed new sponsors during its playoff run, Reigle said, but is seeing “an increased level of sponsor engagement and interest.”

The Rams’ success has perhaps fostered the long-term goodwill of sponsors – and produced short-term gains for the sponsors.

Assaf Eisdorfer, a University of Connecticut finance professor, put out a 2015 study that found sponsors whose corporate logo appears at the stadium of winning NFL teams often see an increase in their stock price.

“When a team is hosting and winning a playoff game, during which tens of millions of viewers see and hear the team’s stadium sponsor multiple times, the team’s success creates a positive sentiment for investors,” Eisdorfer said.

He said he was not surprised, then, that both the American Airlines and Anheuser-Busch share price rose 9 percent in the past four weeks.

Messages left with American Airlines and Anheuser-Busch were not returned.