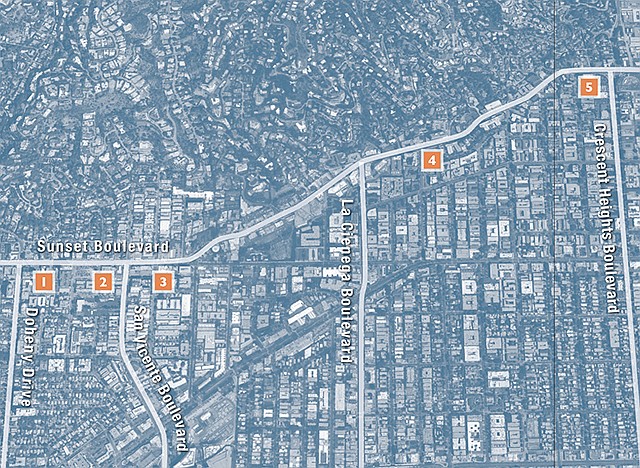 The Sunset Strip, the famed section of Sunset Boulevard in West Hollywood, has long been home to famous bars, clubs and music venues.

But there’s a transition underway heralded by cranes soaring above the Strip − an homage to the burgeoning tourism and hospitality industry. In the 2017-2018 fiscal year, there were 3.59 million visitors in West Hollywood who spent $1.73 billion, according to data provided by the West Hollywood Travel and Tourism Board.

Eight of West Hollywood’s 18 hotels are on the Sunset Strip, but that number will soon rise. Many of the half-dozen new developments planned for the Strip include a hotel component. The projects will also offer residential units as well as retail, dining and nightlife venues.

The developments profiled here – all between Crescent Heights Boulevard and Doheny Drive on Sunset – show the increased demand for high-concept projects along the Strip, which include clubs, hotel rooms and even some office space as well as other amenities.

They include controversial Gwyneth Paltrow-backed Arts Club, at 8920 Sunset Blvd., which will have creative office space, a gallery and a supper club. A revamped Viper Room is part of a proposed 15-story tower with a hotel and condos at 8850 to 8878 Sunset Blvd. West Hollywood had roughly 97,000 square feet of office space under construction at the end of 2018, according to data from Jones Lang LaSalle Inc.

Description: Proposed nine-story project will have creative office space, a gallery and a supper club. West Hollywood residents will decide during the March 5 election whether the city council’s approval of the project will stand.

Description: The 10-story project will have two towers with a combined 149 hotel rooms and 40 private residences as well as restaurants, a bowling alley, a spa and a private membership club.