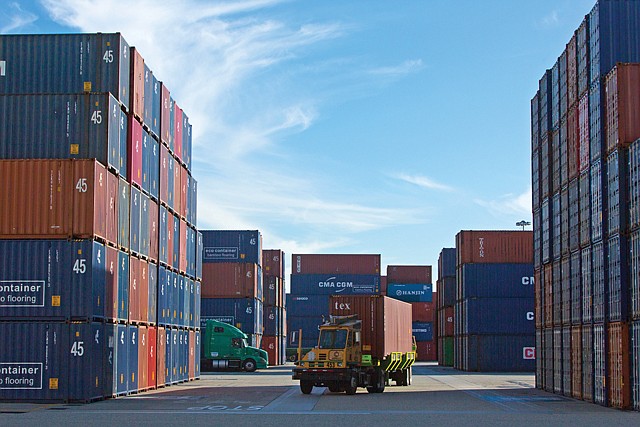 Freight Weight: Disputes over terminal automation at the ports of Los Angeles and Long Beach have flared recently. Photo by Tim Rue/Port of Long Beach

Port of Los Angeles terminal operator APM Terminals, a subsidiary of Danish shipping and oil conglomerate A.P. Moeller - Maersk, has been working for more than a year on a plan to place autonomous freight-carrying vehicles on Pier 400.

That plan is now on hold.

The effort hit a snag last month when Port of Los Angeles Executive Director Gene Seroka pulled the company’s permit request for the project from the city’s Jan. 24 harbor commission meeting amid protests from dozens of union workers. The protest stemmed from what labor sees as a push to eliminate high-paying jobs at the terminal. APM has pitched the move as a way to help it meet strict state clean air standards.

The automated freight-vehicle program would roll out in phases and take three years, said Tom Boyd, an APM Terminals spokesman. The company would not disclose the cost, noting it was not seeking any public funds.

The push by APM is part of a larger move toward automation at both the Port of Los Angeles and the Port of Long Beach. A Los Angeles terminal owned by TraPac Inc., a subsidiary of Japanese shipping company Mitsui OSK Lines Ltd. is almost fully automated. Construction is ongoing at a $1.5 billion fully automated terminal in Long Beach run by Long Beach Container Terminal Inc. The terminal – which is currently held in a U.S.-run trust as Chinese state-run Cosco Shipping Holdings Co. Ltd. seeks to sell it – will be fully operational by 2022.

Terminal operators at both ports are working to keep up with other points of entry around the world as the shipping industry undergoes rapid transformation.

“The ports across the world are transforming at a much faster rate.” said Nick Vyas, director of USC’s Center for Global Supply Chain Management. “It’s rapid, it’s frequent, and its disruption. Unions will have to reconcile with it and create future new jobs instead of resisting.”

Although the Los Angeles port clocked a record-breaking year, officials are under immense pressure to upgrade the facilities to keep up with competition and starkly reduce pollution. Los Angeles Mayor Eric Garcetti and Long Beach Mayor Robert Garcia set a goal as part of a clean air plan to use all zero-emission cargo handling technology by 2030.

“The automation that we are going to do is in line with the clean air action plan,” John Ochs, APM Terminal’s senior director of West Coast labor and regulatory affairs, told union leaders at the harbor commission meeting last month. “But I am not hiding in the back of the action with the labor savings that we are seeking to get.”

He warned the five-member commission appointed by Garcetti not to meddle.

“We have a labor agreement, and I have the ability to automate our facility in accordance with the labor agreement,” Ochs said. “If labor wants to challenge me on that, we will deal with it inside this contract.”

Under contract terms negotiated in 2008, operators can use automated cargo-handling machines that replace workers.

The setback for APM is the latest in a series of recent standoffs at the port involving terminal operators and labor unions.

A week before Seroka pulled APM’s permit applications, one of the region’s biggest logistics firms, California Cartage Co., announced it would shut down its sprawling 85-acre Wilmington warehouse in July. The company had been plagued by labor violations, and the exodus was seen as win for the International Brotherhood of Teamsters, which has been organizing drivers and warehouse workers at the port for years.

The decision, however, also entangled the city in a messy fight over how much influence it can exert over a private company’s labor decisions.

Los Angeles City Councilman Joe Buscaino championed the rejection of a lease renewal for California Cartage, a subsidiary of Cherry Hill, N.J.-based NFI Industries Inc., saying he was aghast at the company’s record of labor violations and labor discord, which included workers compensation and wage claims. The next occupant to lease the land will have to adhere to a labor peace agreement, Buscaino said.

But with that conflict ended, the councilman is now at the center of the battle between APM and International Longshore and Warehouse Union.

Automation is the biggest threat to the ILWU, which represents about 12,000 unionized dock workers in Los Angeles and Long Beach, and has a contract locked in until July 2022. An average full-time dock worker earns $175,000 in annual wages, according to the Pacific Maritime Association, which represents shippers and terminal operators.

“I am trying to prevent another Detroit, another Allentown,” said Buscaino, who represents the harbor area and said talks between the union and terminal operators are underway.

Buscaino sees his role as similar to the one Garcetti played in ending a more than weeklong teachers’ strike that roiled the Los Angeles Unified School District last month.

“Any threat of taking those jobs away is a threat to our local economy and a threat to the people I represent.”