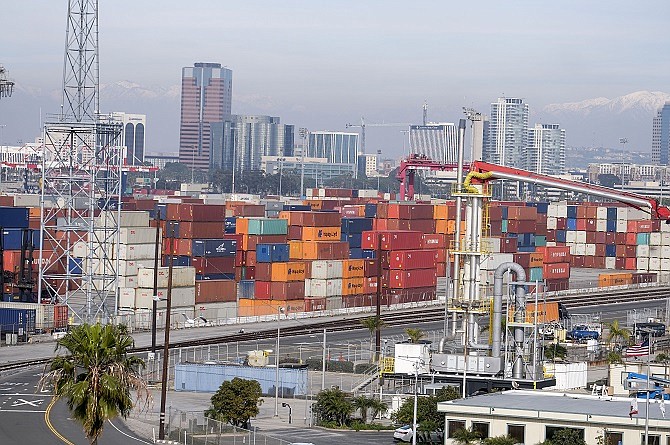 It’s the third month in a row the Los Angeles port has seen less business than last year, and the 10th consecutive monthly decline for Long Beach, according to figures released Dec. 11.

Imports fell 12.2% at the Port of Los Angeles while exports declined 9.2%. Total cargo volume for the month was at 728,918 twenty-foot equivalent units (TEUs), the standard measure of cargo. That’s a 12.4% decrease compared to last year. Year-to-date cargo volume at the country’s busiest seaport is at 8.59 million TEUs, about the same as last year.

“As we expected, 2019 winds down with volumes weakening, due largely to the U.S.-China trade war, which continues to negatively impact American consumers, manufacturers and U.S. supply chain jobs,” Gene Seroka, executive director of the Port of Los Angeles, said in a statement.

“Although we anticipate tariffs will linger well into 2020, we will continue to aggressively invest in our physical and digital infrastructure through this economic cycle,” he added.

Meanwhile total cargo volume at the nation’s major container ports was 1.95 million TEUs, an 8% increase compared to the year-earlier period, according to the Global Port Tracker report released by the National Retail Federation.

The retail trade association attributed the national November cargo volume increase to a “rush to beat a new round of tariffs on consumer goods,” scheduled to take effect Dec. 15. President Donald Trump announced a tentative agreement on a partial trade deal with China in October, but the measure has yet to be finalized, according to NRF.

“At this point, holiday merchandise is already in the country, so the direct impact of new tariffs won’t be seen until the season is over,” NRF Vice President for Supply Chain and Customs Policy Jonathan Gold said in a statement.

“Nonetheless, tariffs are bad for both consumer and business confidence, and we hope that the December tariffs will be canceled or postponed as a sign of good faith,” he added. “We need a deal with China as soon as possible, so we can bring an end to the trade war that has put a drag on the U.S. economy.”

December cargo traffic will likely drop to 1.79 million TEUs due in part to the expected falloff in imports as the holiday season winds down. The 2019 totals are projected to reach a record 21.9 million TEUs, however.

Last year was a record-setting year for both local ports, with Los Angeles at 9.45 million TEUs and Long Beach at 8.09 million TEUs.