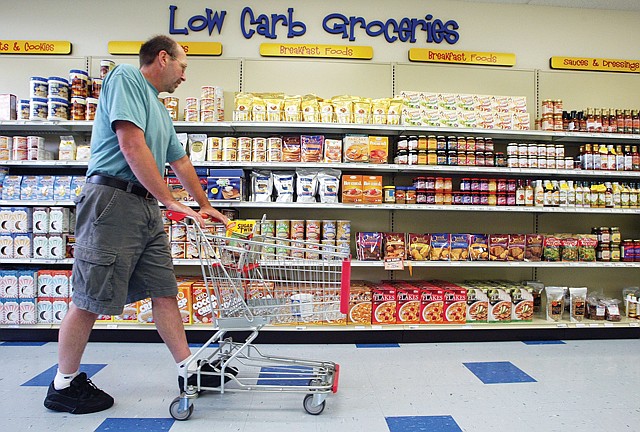 Low-Carb Craze: Consumers have largely moved on from the Atkins diet. Photo by Justin Sullivan/Getty Images

The maker of low-carb, highly processed Atkins-branded foods just made a $1 billion bet on a South Bay-based protein bar company started nearly a decade ago by three technology industry veterans.

Colorado-based Simply Good Foods Co. picked up El Segundo-based Quest Nutrition in an acquisition announced Aug. 21. The all-cash deal is slated to close by the end of the year.

The union would marry two diet crazes — the protein diet fad currently popular with fitness buffs and the Atkins diet, which was developed in the 1960s by cardiologist Robert Atkins and counts actor Rob Lowe as a spokesman.

If completed, the move would diversify Good Foods’ lineup, which is heavily dependent on an out-of-fashion diet fad, and provide the Colorado-based food company with access to Quest’s more robust ecommerce strategy.

It would also turn Good Foods — which today makes frozen meals, shakes, crackers and snacks — into a much larger player in the nutritional snack bar subcategory, which is a $3.3 billion market in the United States, according to market research firm IRI.

“This combination delivers on our strategy to become a broader nutritional snacking company that offers consumers a broad range of brands and products that satisfy their nutritional needs,” Joseph Scalzo, Good Foods’ chief executive, said in announcing the purchase.

With a line of ready-to-eat protein bars, cookies, pizzas and chips, Quest generates about $345 million in sales annually.

A quest for meaning

Quest was founded in 2010 by Tom Bilyeu, Ron Penna and Mike Osborn after they sold their data loss prevention company Awareness Technologies.

The three partners, who also happened to be fitness buffs, were itching for a meaningful new business venture. Penna’s wife had been baking hand-rolled snacks in her kitchen and bringing them to their software company. Even non-gym rats liked the bars. The three knew they were onto something, so they bankrolled the company and promoted it heavily on social media.

By 2014, Quest placed second on Inc. magazine’s list of fastest growing companies, reportedly growing at a clip of 57,000%. The following year, private equity firm VMG Partners bought a minority stake in the company. At the time, Quest was valued at $900 million. Bilyeu left Quest in 2016 to start Impact Theory, which produces self-help videos and provides coaching, classes and other content.

In 2017, Quest underwent restructuring and laid off 524 workers at manufacturing plants in the City of Industry and Walnut. The company also shifted its production and distribution to third parties — similar to the strategy employed by Good Foods.

The two companies estimate that folding the enterprises together could help save $20 million and combined net sales would total $800 million annually.

The acquisition sparked debt ratings agency Moody’s to review one of Good Foods’ subsidiaries, Atkins Nutritionals Holdings Inc. for a possible downgrade, but analysts said the brand is strong and expected to continue healthy earnings growth over the coming year to 18 months.

In an Aug. 22 note, Moody’s analysts wrote that Atkins plans to use a combination of $225 million of cash on its balance sheet as well as incremental debt to complete the purchase. Atkins was merged into the publicly traded Simply Good Foods in 2017.

“Atkins will take on a significant amount of debt with this transaction, and there are unique risks in managing two established brands with different niches in the nutritional snacking product segment,” Vladimir Ronin, a Moody’s analyst stated.

In considering a downgrade, Moody’s will look at financing and risk associated with integrating two different brands, as well as other factors.

Quest’s low-sugar sports performance bars are popular with the gym bunny set, but they’re also marketed as an indulgence with flavors like Birthday Cake, Cookie Dough and Chocolate Brownie that are meant to appeal to those watching their sugar intake.

Quest sweetens its bars with stevia, sucralose and erythritol, ingredients that don’t carry the same calories as refined sugar.

Analysts say both packaged food-makers are trying to appeal to the sugar scare as diabetes and obesity wrack the United States and other developing nations.

“The higher-level trend is lower sugar,” said Kara Nielsen, an executive who tracks food and beverage trends at CCD Helmsman. “Heinz is reducing it in their ketchup, and we are seeing a lot of companies now talk about sugar.”

Brands like Los Feliz-based Eden Creamery, better known as ice cream-maker Halo Top, made a splash by relying on similar sweeteners to those used by Quest.

Nielsen said the company can take advantage of consumers whose pallet is accustomed to this taste. And it’s well-positioned to jump into other fads like the keto diet — a low-carb and high-fat regimen.

“Sugar is the enemy of protein,” Lowe laments in an Atkins bar commercial about the actor’s “little secret.”

“These are the kinds of products that are just what the consumers want as long as they meet FDA guidelines,” said Roger Clemens, an associate director of the regulatory science program at the USC School of Pharmacy. While the bars and snacks don’t replace a balanced diet, he said they can be a good protein alternative for the infirm or picky children.

Scalzo told investors in July that Lowe’s ads have highlighted the nutritional value of their bars.

“Our strategy of educating consumers on low-carb, low-sugar nutrition is working,” he added. “We are confident in the continued effectiveness of our marketing, our improved supply situation, and our financial flexibility to invest in proven growth initiatives.