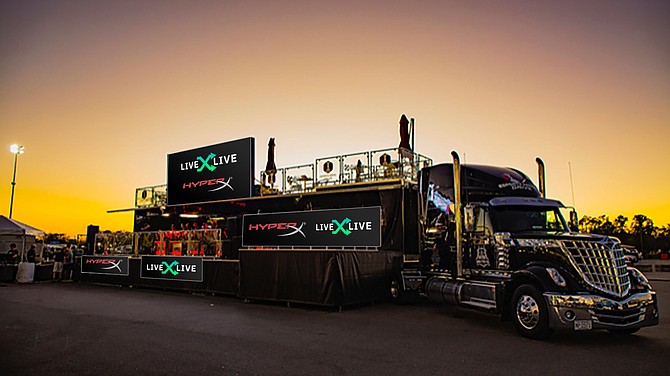 A HyperX Truck, which LiveXLive and Allied Esports will use to put on traveling esports events.

The trucks will be used to host esports events as well as a program called LiveZone, which streams interviews with showbiz personalities, music news and commentary. The first LiveZone broadcast will take place Sept. 21 in Las Vegas at the iHeartRadio Music Festival.

LiveXLive Chief Executive Rob Ellin said in a statement that the partnership is “bringing the two fastest-growing live entertainment categories together, enhancing the experience for both consumers and brands,” and unifying music and gaming fans to “provide the best in streaming entertainment.”

LiveXLive got its start in 2009 broadcasting live music and entertainment events online. It went public in 2010 and reported revenues of $33.3 million in 2018, a 350% jump from the year prior. Its operational costs still remain high, leading to a net loss in 2018 of $34.7 million.

“Esports and gaming represent an expansive and emerging audience that has been incredibly hard to reach by those targeting its demographic,” Allied Esports Chief Executive Jud Hannigan said in a statement, adding that linking with LiveXLive allows Allied to “continue to bridge the gap between esports and other entertainment industries.”

CORRECTION: An earlier version of this story misstated where Allied Esports Entertainment Inc. is based. The company is located in Newport Beach.