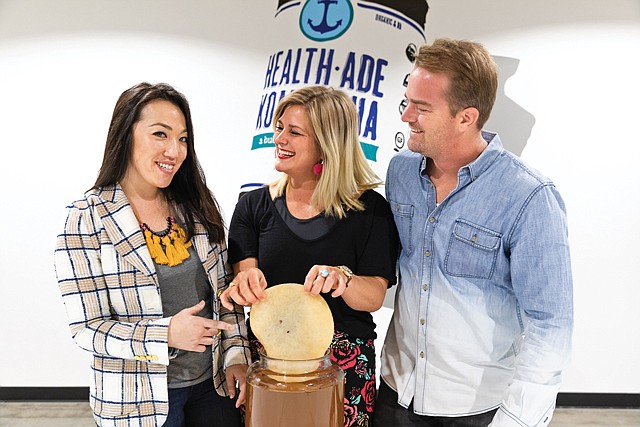 Daina Trout began selling home-brewed kombucha at the Brentwood farmer’s market in 2012, working alongside her future husband and her best friend to sling the fermented tea for $5 a bottle.

Today their company, Health-Ade, is a leader in the fast-growing $815 million industry, producing 100,000 bottles of the bubbly concoction each week and attracting investments from Coca-Cola Co. and venture capitalists.

Trout dreamed up the company with her then-boyfriend Justin Trout and friend Vanessa Dew who like Daina, worked in pharmaceutical sales. Over hot tub sessions and dinners, the then-twentysomethings called themselves the “entrepreneur club.”

“We were all looking to understand, what is our higher purpose?” Dew said. “We were all feeling really bored with our jobs.”

Eventually they decided to try selling the kombucha that Trout, who’d been experimenting with fermented foods for years, had been creating in her kitchen.

The low-sugar beverage had long been popular with health enthusiasts, gaining a cultish following for its promise as a probiotic that helps improve digestive health.

Shortly after the crew sold their first batch at the farmer’s market, they started to gain a following.

By the next year, they said, they were working out of a Manhattan Beach bakery, where the owner let them make their drink on the premises in exchange for working at the register.

The fermented tea takes about 21 days to brew and is created by what’s often referred to as a “scoby,” the acronym for a symbiotic culture of bacteria and yeast that’s added to tea to assist fermentation.

The trio began selling the brew wholesale. Soon they were cruising around town delivering their goods. In 2013, they quit their jobs and secured a base for operations in Gardena. Growth was ballooning, and by the next year grocery chain Gelson’s Markets was calling.

The move from mom-and-pop brewers to major distributors was a big leap for the friends, who were used to bringing five cases to a farmer’s market, not delivering four pallets to a grocery chain, Dew said.

The largest beverage maker in the world, Coca-Cola Co., took an interest early, as did Century City-based First Beverage Group, which was among a handful of venture capitalists that, according to PitchBook Data Inc., have helped raise $34.1 million to fund the company since 2016.

In 2016, the company opened a 50,000-square-foot office and production and bottling facility in Torrance.

Rows of palettes stacked 20 feet high with 2.5-gallon jugs of scobys and fermenting tea sit in a cooled room at the plant, the air sweet with a vinegar scent.

Once the teas are ready, they are shuffled into another room where they are pulled onto a conveyer belt with the help of robots and bottled in 16-ounce brown tinted containers adorned with the company name and an anchor logo.

The idea for the anchor symbol came to the founders when they read that thousands of years ago, Japanese sailors fermented kombucha to give them sustenance. They had been looking for a symbol that was “strong, grounding and timeless.” In many ways, the image is a good fit: The company and the process has anchored the lives of the founders.

This year, Health-Ade Kombucha aims to continue on its trajectory. With a recent infusion of funding from Coca-Cola, which already had a minority stake in the company, analysts believe there’s room for growth in the market.

It’s “another example of kind of a hot company that is on trend and that is attractive not only to health-conscious consumers but to big food and beverage companies,” said David Garfield, who heads the consumer products practice at consulting firm AlixPartners.

Health-Ade declined to say how much Coca-Cola invested.

That’s an attractive prospect for a beverage company like Coca-Cola, which made its name on high-sugar, carbonated soda. Declining interest in Coke has executives looking at upstarts like Health-Ade Kombucha.

Coca-Cola’s Venturing & Emerging Brands arm has been partnering with smaller companies to diversify its offerings.

In 2018, Coca-Cola acquired Australia-based Organic & Raw Trading Co., best known for the kombucha brand Mojo. It also acquired a minority stake in BA Sports Nutrition, the company that makes the sports drink BodyArmor, and made investments in Zico, a coconut water brand.

Competitor PepsiCo. Inc. has made similar moves, acquiring KeVita, a kombucha and fermented probiotic producer, in 2016.

The partnership with Coca-Cola will open Health-Ade’s distribution channels, so it can be found more widely on shelves across the United States and possibly even globally.

“I knew we needed the right investor to support Health-Ade’s growth, and we found that partner in Coca-Cola’s Venturing & Emerging Brands,” Daina Trout said.