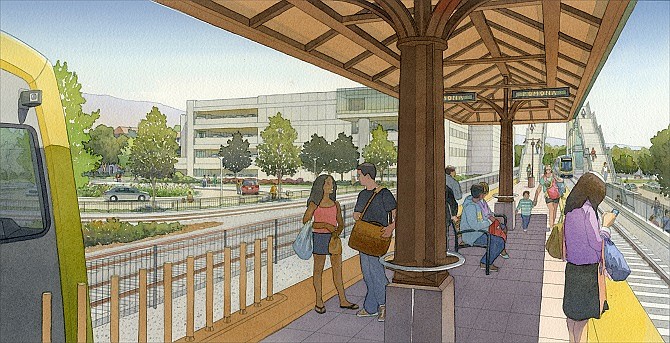 The Foothill Gold Line Extension Construction Authority on Aug. 14 awarded an $805.6 million contract to a joint venture of Kiewit Infrastructure West Co. and Parsons Corp. to construct a 9-mile extension of the Foothill Gold Line light rail project from Glendora to Pomona.

The authority also awarded the Kiewit/Parsons joint venture an optional for a $381 million contract extension to build an additional 3 miles of the light rail line from Pomona to Montclair in San Bernardino County, should the funding for that segment materialize. The option expires in September 2021, after which time any construction contract for that segment would have to be rebid.

Kiewit Infrastructure West is a unit of Omaha, Neb.-based Peter Kiewit Sons’ Inc., while Parsons moved its headquarters earlier this year to Centreville, Va., from Pasadena.

“Kiewit and Parsons both enjoy a long-time relationship with the Construction Authority, having both worked with the agency since 1999 when we began design on Phase 1 from Union Station to Pasadena,” Steve McFadden, area manager for Kiewit Infrastructure West, said in a statement.

Last fall, the Foothill Gold Line Authority split the project into two parts, moving up construction for the first 9-mile segment by a couple years but setting aside the remaining 3 miles unless and until the extra $360 million in funds becomes available.

Most of the $805 million for the Glendora-to-Pomona segment is coming from Measure M, the half-cent sales tax increase approved by L.A. County voters in 2016 that is expected to raise $860 million a year for 40 years. The light rail authority is working with the Los Angeles County Metropolitan Transportation Authority to identify sources of funding for the $360 million shortfall.

Major construction on the 9-mile Foothill Gold Line segment between Glendora and Pomona is expected to start next year and conclude in 2025. It will include relocation of existing freight track, installation of the light rail track system, four new light rail stations – in Glendora, San Dimas, La Verne and Pomona – and improvements at 40 grade crossings.

If funding is available, construction of the 3-mile extension to Montclair would wrap up in 2028, just in time for the Summer Olympic Games and Paralympic Games that year. This segment would include stations in Claremont and Montclair.