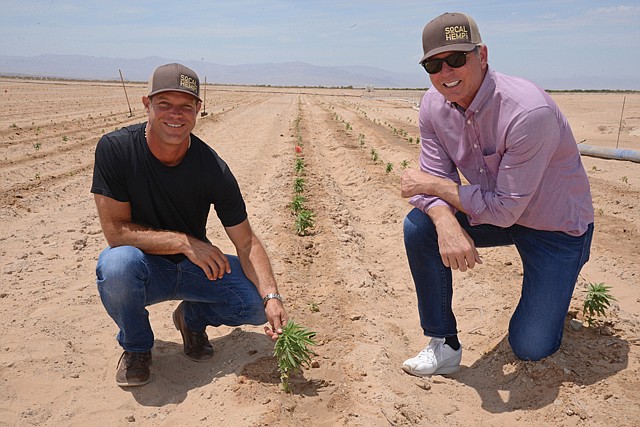 Field of Dreams: Graham Farrar (left) and Scott Slater at Cadiz’s land in the Mojave Desert. Photo by Amy Steinfeld

With its long-awaited water project encountering yet another delay, Los Angeles water developer Cadiz Inc. is turning to a new cash crop for its desert land holdings: hemp production.

Cadiz earlier this month entered into a joint venture with a division of Long Beach-based California Cannabis Enterprises Inc. to grow hemp on Cadiz-owned land that sits atop a Mojave Desert aquifer. The two companies would evenly split proceeds from hemp sales.

Under the deal, the joint venture will be called SoCal Hemp Co. and will cultivate organic hemp on 9,600 acres Cadiz owns north of Joshua Tree National Park.

Once it’s fully running in a few years, the combined farming and hemp extraction operations will employ roughly 1,000 people on site, executives with the companies said. That would make for one of the largest commercial hemp-growing operations in California, targeting both business and consumer markets.

With its low water requirements, hemp fiber derived from the cannabis plant is increasingly used as a cotton substitute in clothing. And cannabis oil, or CBD, can be extracted from hemp. The market for CBD has grown exponentially in recent years with consumers using it for medicinal purposes.

For Cadiz, the deal gives the company a chance to more fully monetize its vast desert land holdings as the approval process for its water project drags into its third decade. Cadiz leases a portion of its land to Santa Paula-based Limoneira Co. for the production of lemons, receiving roughly $440,000 a year in lease payments. Hemp requires less water to grow than most commercial crops do, making it suitable for a desert environment with access to an aquifer.

“With our water and land, we will be able to supply a continuous cycle of hemp production to the market,” said Cadiz Chief Executive Scott Slater. “And with this joint venture arrangement, as the market rises for hemp, we will be right in the middle of it.”

“The hemp space is exploding right now, and our ability to partner with a publicly traded company (Cadiz) on a venture like this represents a big moment,” said Kyle Kazan, chief executive of both California Cannabis Enterprises and Glass House Farms. He added that the remote location of the Cadiz land reduces the chances for neighbor opposition to the hemp growing and extraction operations.

Both companies are taking advantage of a recent change in federal law that allows for the production of hemp. Provisions of the 2018 farm bill pushed through by Senate Majority Leader Mitch McConnell, R-Ky., exempt hemp production from the federal ban on cannabis, provided the concentration of the chemical compound THC (which is responsible for providing the high associated with marijuana use) remains under 0.3%.

Prior to this legislation, only small-scale pilot programs for industrial hemp use were allowed, with tight restrictions. Last year’s legislation allows hemp to be transported across state lines for the first time and puts few restrictions on the sale or use of hemp.

“Prior to last year, we periodically had received offers to use our land for the cultivation of hemp because of its low water requirements, but we had to decline because hemp production was not legal under federal law, and we are a publicly traded company subject to federal regulation,” Slater said. “But as soon as hemp production became legal, we started actively exploring opportunities.”

The joint venture comes as a much-needed boost for Cadiz. Just 24 hours before the hemp announcement, the water developer suffered a significant setback when Gov. Gavin Newsom signed legislation ordering another environmental review for Cadiz’s long-running proposal to pump and transfer up to 50,000 acre-feet of water from its desert aquifer to several Southern California water agencies. The legislation arose in response to concerns from environmental groups that the water pumping project would drain the aquifer.

The additional layer of environmental review will delay construction on the water pumping project for at least 18 months — and longer if any litigation arises. This means a longer wait for Cadiz investors seeking a payoff from water sale revenues.

“Cadiz’s utilization of its assets for revenue-based operations including hemp is a strategic imperative … (given) the seemingly unending environmental review pathway the company has experienced” for its water project, said Larry Kosmont, a Manhattan Beach economic development consultant who’s familiar with the Cadiz project.

Kosmont said the hemp market, while still in its infancy in the United States, is considered a viable market by many investors.

“Hemp is a crop that is poised to grow in demand particularly based on consumer interest in CBD products,” he said.