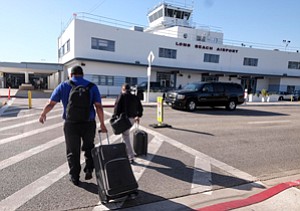 Up in Air: Passengers at Long Beach Airport, which may add international flights. Photo by Ringo Chiu.

Long Beach Airport passenger traffic fell 15.5% for the first half of 2019 compared to the same period last year as the fallout continues from JetBlue Airways’ pullback in flights in September.

The main culprit for the drops was the decision by JetBlue Airways Corp. — long the dominant carrier at the municipally owned airport — to sharply cut flights after the city failed in late 2017 to approve construction of customs facilities to support international flights. Starting in September, JetBlue cut 11 of its 34 daily flights. As a result, the airline's passenger boardings at Long Beach fell 39% for the first half of 2019, to 484,000.

Yet even with the cutbacks, more than half of all passengers going into or out of Long Beach still fly JetBlue.