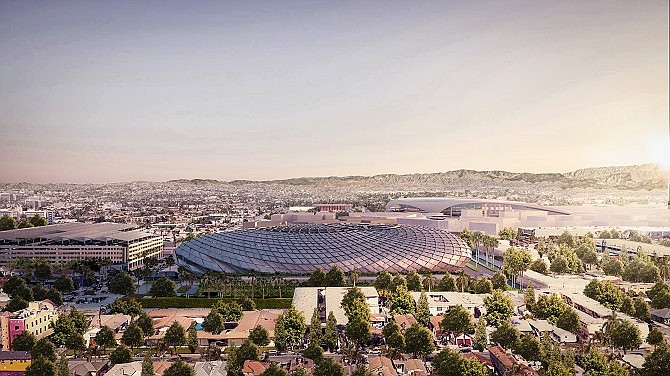 A rendering of the L.A. Clippers new arena in Inglewood.

Century City infrastructure giant Aecom is taking another step to transform the Inglewood skyline with the recent award of a contract to design a new arena and adjacent entertainment complex for the Los Angeles Clippers basketball team.

Aecom is already one of the principal contractors along with New York-based Turner Construction Co. on the $5 billion Los Angeles Stadium and Entertainment Complex at Hollywood Park, is slated for completion late next year. That complex, also in Inglewood, will house two National Football League teams, the Los Angeles Rams and the Los Angeles Chargers.

Late last month, the Clippers announced that Aecom would be designing the team's $1 billion, 26-acre Inglewood Basketball and Entertainment Center across the street from the NFL stadium complex. Bill Hanway, executive vice president for global sports at Aecom, is leading the design team.

In addition to the sports arena, the project located on West Century Boulevard will include the Clippers’ business and basketball offices, training facility, as well as community and retail spaces. The project is targeted for completion by fall of 2024, following the expiration of the Clippers’ lease at Staples Center.

“Inglewood is in the midst of a sports evolution. Our goal is to deliver an intense, world-class facility that reflects the passion of the Clippers’ leadership, as well as the unique characteristics of the city,” Hanway said in a statement.

But the arena faces legal challenges. One lawsuit was filed by neighboring residents concerned about traffic and further gentrification as this sports and entertainment cluster takes shape. Another lawsuit has been filed by Madison Square Garden Co., owner of the nearby Forum entertainment venue.

In May National Basketball Association Commissioner Adam Silver said he supported the Clippers’ attempt to build the arena, saying it would ease scheduling conflicts that now exist with the other professional sports tenants using the Staples Center, the Los Angeles Lakers and the Los Angeles Kings.

The arena’s exterior will have a grid appearance, intended to resemble a basketball net, with a series of indoor-outdoor “sky gardens” for food and beverage stands that will be accessible from every level of the arena, according to the announcement.

“The design takes advantage of the climate of the city and will incorporate indoor/outdoor spaces that are a seamless extension of the beautiful entry plaza that reflects the special landscape of Southern California,” Hanway said.

Also in the earnings report, Aecom Chief Executive Michael Burke said the company plans to make additional cost cuts in coming months as part of an effort to increase margins, particularly in its design and consulting services segment.