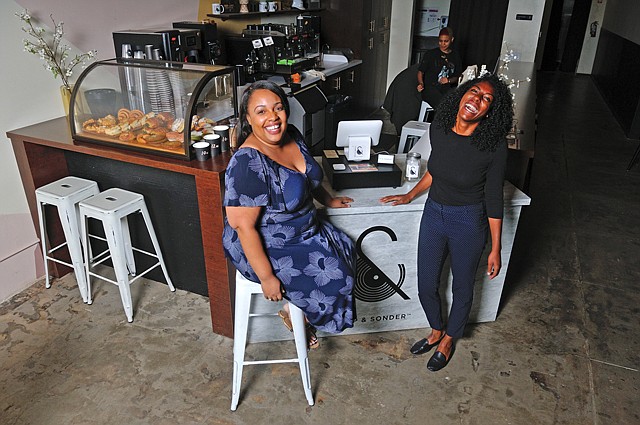 Sip & Sonder, in the heart of Inglewood, isn’t just any coffee shop.

Since launching in 2017, the neighborhood meeting spot has become a hub for budding entrepreneurs and venture capital leaders in the community.

Co-founders Shanita Nicholas and Amanda-Jane Thomas, both corporate lawyers by day, have spent their off hours hosting talks by local venture investors and pitch sessions for startup founders seeking feedback on their business plans.

“We are building a community in our space,” Nicholas said.

Within a few years, the women relocated to Los Angeles where they joined different law firms — Nicholas works at Stubbs Alderton & Markiles and Thomas is with Zuber Lawler & Del Duca.

In 2017, they launched their coffee shop side project on Inglewood’s Market Street. The cafe is outfitted with stylish and cozy seating and end tables stacked with books by Maya Angelou, Zadie Smith and Zora Neale Hurston.

Customers begin lining up early to get their morning fix.

Sip & Sonder is part of a growing revitalization in Inglewood’s main business district, where renovations of a boarded up Fox Theatre will soon be complete and a new Los Angeles County Metropolitan Transportation Authority rail station is slated to open.

Inglewood Mayor James Butts Jr. is enthusiastic about the future of Market Street. New retail and housing developments are in the works, and the city plans to add a 5G cellular network — one of the first in Southern California.

“What is exciting about Market Street is the anticipation of new stakeholders, like Sip & Sonder and the Miracle Theater opening recently,” Butts said. “These businesses are anchors on Market Street and will be reminiscent of the old downtown Inglewood.”

Nicholas, a New Jersey native, said she was attracted to Inglewood because it has the same vibrancy as Brooklyn. “It’s a place for collaboration and creativity,” she said.

Just west of the coffee shop, construction has begun to convert an old bank building into the new home of the L.A. Philharmonic Association’s Youth Orchestra Los Angeles. The free music education program serves nearly 1,000 students from across Los Angeles.

Sip & Sonder also is building a production studio for recording artists and others in the back of its building — another creative hub Nicholas and Thomas are hoping to nurture in the community.

“This will make this all marketable,” Thomas said.

Earlier this year, Nicholas and Thomas decided to pause their efforts with the investors club in order to focus on the coffee shop business. They said they plan to resume their nonprofit work in September, hosting “fireside chats” with investors and more pitch competitions for startup businesses.

For the time being, the coffee shop is doing its part to foster community — simply by serving up hot drinks and pastries in a comfortable setting.