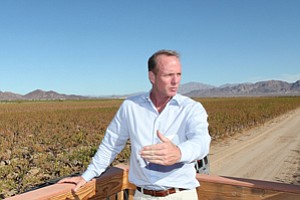 Los Angeles water developer Cadiz Inc. has entered into a joint venture with a division of Long Beach-based California Cannabis Enterprises Inc. to grow hemp on Cadiz land that sits atop a Mojave Desert aquifer.

The two companies would evenly split proceeds from hemp sales, according to an Aug. 1 announcement.

Under the deal, the joint venture will be called SoCal Hemp Co. and will cultivate organic hemp on 9,600 acres Cadiz owns north of Joshua Tree National Park. The companies said this would create one of the largest commercial hemp-growing operations in California, targeting both business and consumer markets.

The announcement came one day after Gov. Gavin Newsom signed legislation ordering another environmental review for Cadiz’s long-running proposal to pump and transfer up to 50,000 acre-feet of water from its desert aquifer to several Southern California water agencies. The legislation arose in response to concerns from environmental groups that the water pumping project would drain the aquifer.

Cadiz opposed the legislation, saying it unfairly targeted a single project that has already received environmental clearance. The company also disputes claims its project would drain the aquifer.

Cadiz already leases out about 2,100 acres of its land for the cultivation of several crops on a small-scale basis, according to the company’s 2018 annual report. Permanent crops include grapes, dried-on-the-vine raisins and lemons. Seasonal crops include squash, asparagus and beans. According to the annual report, Cadiz received $440,000 in lease payments related to those farming operations last year.

Cadiz Chief Executive Scott Slater said hemp cultivation "makes perfect business sense for us and our holistic land management plans given the well-documented low-water demand of the crop. We see tremendous revenue potential for hemp, given the exploding market demand and our competitive advantage of being in California.”