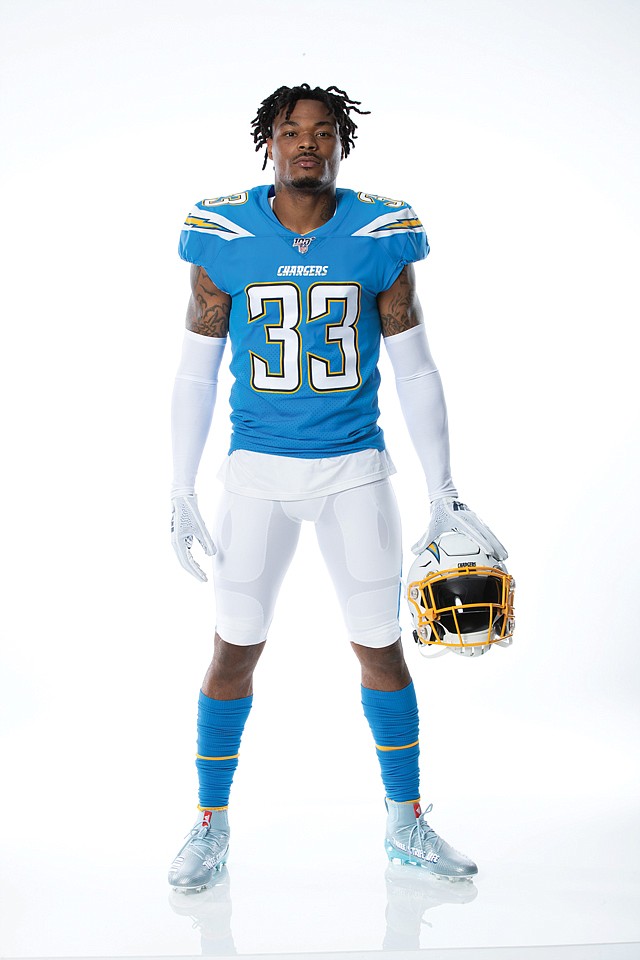 Fan Favorite: The Chargers announced the return of its powder blue jerseys. Photo by Mike Nowak/Chargers

Soccer is seeking some serenity.

Both Major League Soccer and the U.S. Soccer Federation are partnering with Venice-based Headspace Inc., a health and wellness company that makes a meditation app for smartphones.

As part of the three-year deal, Headspace will provide free subscriptions to all MLS and national team athletes, coaches and club staff.

MLS Chief Medical Officer Margot Putukian said the Headspace partnership was part of the league’s effort to help bolster athlete mental health, which has been a focus for the league in recent years.

The deal also includes the U.S. women’s national team, which is preparing for the FIFA Women’s World Cup this summer in France. Headspace is providing a personalized meditation training program for each player on the squad.

Headspace said it will also work with MLS and U.S. Soccer to research how mindfulness and meditation impacts player performance and use that data to offer specific programs for a broader soccer audience in the future.

Headspace partners with more than 350 companies, including Google and LinkedIn Corp. It also works with the National Basketball Association, Nike Inc., Apple Inc. and Amazon.com Inc. The company says its services reach 45 million users in 190 countries

The push to privately fund the 2028 Olympic Games in Los Angeles took an innovative turn this month when NBCUniversal and the LA 2028 organizing committee struck a deal to sell sponsorships and broadcast advertisements in tandem.

The deal is the first of its kind in U.S. Olympic and Paralympic history, and represents a hedge of sorts by the organizing committee, which will cede some control over the sponsorship process — and revenues — to NBC. The parties did not disclose how much money the broadcaster shelled out as part of the deal.

The LA 2028 committee is trying to raise $2.5 billion in domestic sponsorships to help fund the games privately; the total cost is expected to top $6 billion.

If the organizing committee is unable to raise enough money, Los Angeles taxpayers would be on the hook for the remaining cost of the games. Both city and state legislators have said they will step in with public funds if organizers fall short on private funding.

Casey Wasserman, chairman of LA 2028, brokered the deal on behalf of the organizing committee with Linda Yaccarino, NBCUniversal’s chairwoman of ad sales and client partnerships.

Yaccarino will lead the NBCUniversal sales team, which will work with an LA 2028 team put together by Wasserman. The team’s job will be to sell TV, digital and live event advertising in addition to brand activations for Team USA. It remains to be seen if brands will be excited by the potential for the joint marketing because historically, sponsorship and media time have been negotiated separately.

“Nothing brings people together like the pure emotional power of the Olympic Games,” Yaccarino said in a statement, “This partnership between NBCUniversal and LA 2028 is a true first for the industry, and gives marketers the opportunity to make an unrivaled economic and cultural impact.”

NBCUniversal had already paid $7.75 billion for the rights to televise and stream the Olympics from 2022 through 2028.

As the Los Angeles Chargers ready for their third year in L.A., the team sent a jolt through its fanbase by announcing the return of its classic powder blue jerseys as primary home uniforms for the 2019-20 season.

The Chargers announced the move via Twitter with a video simply titled, “You’re welcome.” The video showed clips from the franchise’s history featuring players sporting the powder blue tops and series of screenshots of fans pleading the jerseys’ return. The video ended with Chargers safety Derwin James donning a new powder blue jersey.

The jerseys were first worn during the team’s inaugural season in 1960 and were a staple until 1974. The powder blues were brought back in 1994 and have been worn ever since as an alternative jersey. They will replace the Chargers’ navy blue tops. The team is also bringing back the gold facemask on their helmets for every game this season.