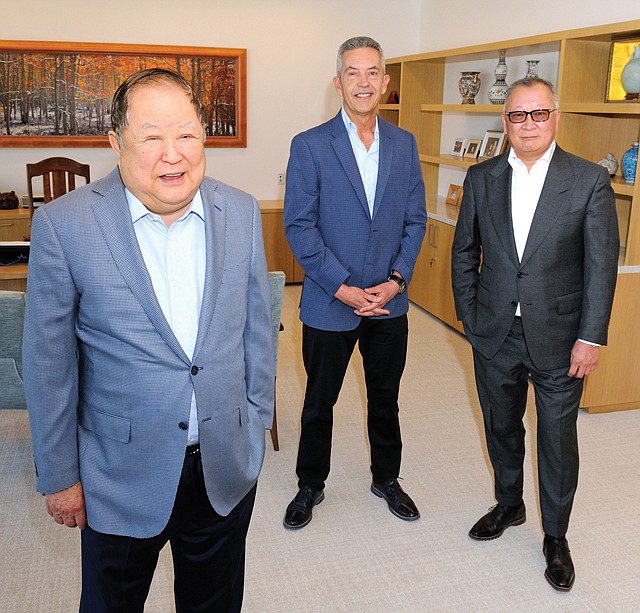 Downtown-based Preferred Bank has fashioned itself into one of the region’s most profitable banks by focusing on the L.A. market, keeping its branch footprint small and staying away, for the most part, from growth through acquisitions.

That’s a stark contrast to many of the Los Angeles area banks in Preferred’s peer group, many of which have tried to expand with mixed success through mergers and forays into new territories such as Texas and the Tri-State region.

The bank has been able to grow its assets while maintaining this conservative strategy, according to Preferred executives. The firm has more than doubled its assets to $4.3 billion from $1.9 billion in June 2014.

“I’m more of a manager, a day-to-day operator, not a dealmaker,” said Li Yu, the bank’s 78-year-old chairman, chief executive and founder, explaining the company’s success. “Do not play the game above your head — or wallet.”

The conservative strategy seems to have paid off. As of March 11, S&P Global Market Intelligence Inc. ranked Preferred Bank as the 20th best-performing community bank in the United States with assets between $3 billion and $10 billion. The ranking is based off banks’ expenses as a percentage of revenue — in other words, how much they spend for each dollar they make.

Preferred Bank also ranks No. 1 among L.A. County-based banks when it comes to return on equity, which was 18.4% last year. That beat out other peers, such as Pasadena-based East West Bancorp Inc.’s 17.4% rate in 2018 and downtown-based Cathay General Bancorp’s 12.8%.

The return on equity is a measure of the profitability of a business in relation to the equity. It tells how well a company uses investments to generate earnings growth.

At the end of last year, the financial institution found itself among the top five banks in Los Angeles County as ranked by problem or nonperforming assets as percent of equity. Problem assets are defined as commercial loans where a debtor has made zero interest or principle payments in the last 90 days.

Fourth quarter 2018 data from the Federal Deposit Insurance Corp., which regulates banks, showed that 10.8% of Preferred’s assets fell into this category — the fourth most among L.A. County banks.

Edward Czajka, Preferred’s chief financial officer, said the number was artificially inflated by a $41.8 million package of delinquent luxury condo loans the bank sold on March 29 for $36.9 million. Preferred took a roughly $1.4 million loss on the sale after taxes and other adjustments, according to a filing with the Securities and Exchange Commission.

Czajka said the move provided financial relief. “It removes uncertainty surrounding the disposition of these assets, and that is meaningful in the minds of our investors,” he said.

“While we are disappointed by the pricing of the transaction, we are pleased to see the issue put behind the company,” said Aaron James Deer, managing director of Sandler O’Neill and Partners in New York.

Ironically, the loan package that pushed up Preferred’s nonperforming asset ratio was entered on its books as part of a rare acquisition made by the bank: the $22 million purchase in late 2015 of United International Bank in Flushing, N.Y.

The United International acquisition cemented in Yu’s mind that Preferred should not be in the acquisition market and focus instead on organic growth.

“There are very limited targets (for acquisition), and the price they are asking is too high,” Yu said. “For us, we decided building shareholder value is most important.”

Yu explained that his four-person senior executive team — comprised of Yu, Czajka, President and COO Wellington Chen, and Nick Pi, executive vice president and chief credit officer — are focused instead on the local market and increasing business in the region.

Such lean leadership can only cover so much ground, Yu said. “If we were to go to Texas or Seattle, that would put further strain on our management team,” he said. “We want to invest in this area.”

“They are very much an entrepreneurial business focused on controlling costs. They run a bank that is much more efficient than all others,” he said.

“The model is working well. They should stick to the knitting and not mess up the business,” Moss added.

For now, the status quo is a good position for Preferred. The bank paid its highest dividend — 30 cents a share — in January. And the company has $600 million in cash on hand.

Preferred counts 600-700 customers; 1,200-1,300 loans; and 20,000 clients who have deposits in the bank, according to Yu. It does no lending under the auspices of the Small Business Administration, but it has profited from lending to mid-market commercial businesses that generate from $5 million to $500 million. Clients include a prominent restaurant chain and a steel importer that executives at the bank declined to name.

Despite Preferred Bank’s solid performance, the community bank and others in its peer group have been shaken over the past year by rising interest rates, saber-rattling over trade wars with China and signs of an economic slowdown.

Other banks with similar profiles in Los Angeles have seen a comparable stock swoon.