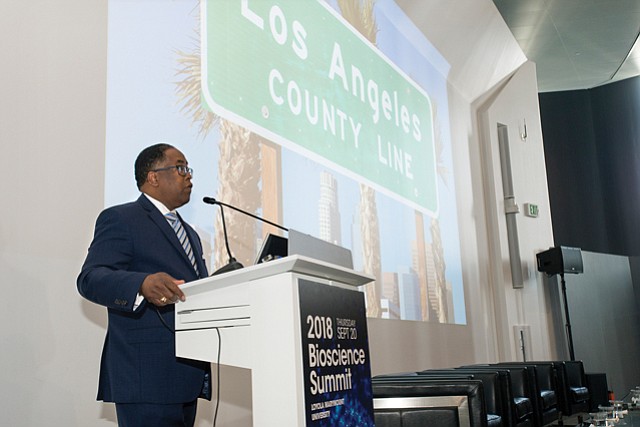 At least that was the official declaration Sept. 20 by county Supervisor Mark Ridley-Thomas at the county’s inaugural Bioscience Summit, held this month at Loyola Marymount University in Playa Vista.

Ridley-Thomas’ declaration certainly applied to perceptions that persist even though Los Angeles has already surpassed San Diego by several key measures when it comes to biosciences.

Los Angeles County leads its neighbor to the south in overall bioscience jobs: 70,000 in Los Angeles to 50,000 in San Diego County, according to a study last year by Biocom, a statewide trade group based in San Diego.

San Diego still holds the edge in biorenewables, including biofuels.

Biosciences in Los Angeles generated $40.3 billion in economic activity in 2016, according to the most recent data from Biocom, while San Diego’s industry generated $34 billion. San Diego still holds a slight edge in bioscience labor income.

Ridley-Thomas also formally announced Bioscience Los Angeles County, or BioLA, a county-led nonprofit agency to promote the local bioscience industry, draw venture capital and nurture startup companies. He announced biotech giant Amgen Inc. of Thousand Oaks as one of what is expected to eventually be a roster of 11 founding private sector sponsors.

“Amgen is delighted to be a charter member of BioLA,” said David Piacquad, senior vice president of business development for Amgen. “I think it’s a great initiative. I think it fills a real void that we have.”

An incubator at the California NanoSystems Institute at UCLA was rebranded as the Magnify lab earlier this year with a goal of accelerating bioscience and other high-tech startups, including some from beyond the campus.

So far, so good for the restructured Magnify, which has a new advisory board to go with its broader mission and has seen a 90 percent boost in applications since the changes took hold in the first quarter of this year. Its 21 portfolio companies have raised more than $18 million in investor funds over the same period.

The Magnify incubator opened in 2014 as the CNSI Incubator at UCLA and has since drawn a total of $144 million in investor funds. It received 19 applications from startup companies in the first half of 2018, compared with 10 for all of last year.

The close of summer has highlighted a season for charitable giving across Los Angeles.

Kaiser Permanente Southern California contributed $570,000 in grants on Sept. 25 to help residents and businesses impacted by last year’s Thomas Fire, which engulfed 280,000 acres in Ventura and Santa Barbara counties, one of the largest in state history.

The Pasadena-based health system funded a group of one-year grants to nonprofit groups, bringing its total contribution to more than $1 million since the December 2017 fire started.

The ThinkCure! campaign, as tallied on Sept. 19, raised more than $32,000 raised by Dodgers fans and the Los Angeles Dodgers Foundation.

German shoe giant Puma SE donated $100,000 last month to a fund launched by actor/producer Selena Gomez for lupus research at Keck School of Medicine of USC. The Sept. 12 gift to the Selena Gomez Fund for Lupus Research will underwrite studies of targeted therapies for the chronic autoimmune disease.