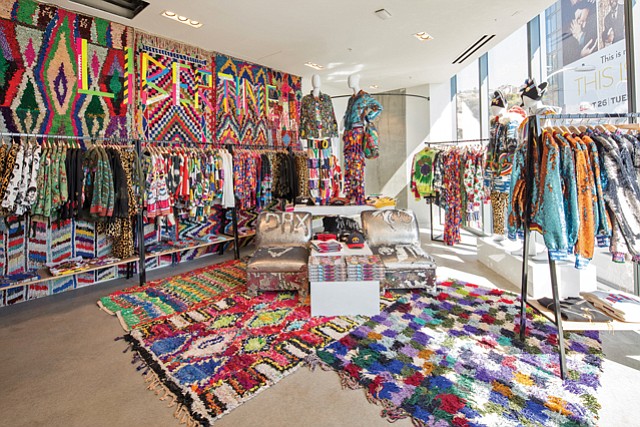 8500 W. Sunset Blvd. in West Hollywood saw a steady stream of musical acts, trunk shows, pets, cocktail offerings and other types of in-store events and services over the past year. That’s what it took for Fred Segal Inc. to establish a solid foothold at its new flagship store on the Sunset Strip.

Mission accomplished, according to the retail brand’s owner, which doesn’t disclose financials but said the new location beat its first-year goal on sales by 20 percent.

Now the 57-year-old operation – long known as a launching pad for cutting-edge fashion – is going on the road. There are similar strategies for in-house events and appeal in the works for company-owned stores in other markets in the United States as well as licensed locations overseas.

Fred Segal is the eponymous creation of a merchant who built its cache over decades from its Los Angeles base. It’s been in the hands of Sandow Media since 2012, when Sandow paid an undisclosed amount for the Fred Segal brand, which at the time had a store on Melrose Avenue in West Hollywood and another in Santa Monica. Fred Segal Santa Monica has since closed. The Melrose store is under different ownership and a legal dispute over the name is scheduled to be resolved later this year.

Sandow bills itself as a media company turned-brand-builder with “an untraditional approach” that “allows us to grow, diversify and demonstrate strength across a range of business areas,” according to its promotional material. In 2014, it sold a majority stake of Fred Segal to downtown-based Evolution Media Capital.

It launched a growth strategy for Fred Segal this month, with two licensed stores in Japan. Others are on the way in Malaysia, Taiwan and Switzerland.

“We are owner-operators at our domestic locations,” said Allison Samek, Fred Segal’s chief executive. “Internationally, we license our brand, and a developer or operator there handles the leasing of the stores and brands.”

Another domestic store opening is on the horizon, too – a spot in Malibu is slated to open in early 2019 to complement the West Hollywood flagship and an outpost at Los Angeles International Airport.

The expansion plan aims to build on the strong sales and lessons learned at the West Hollywood flagship store over the past year.

“You need to give people a reason to come into a physical store these days,” said Josh Aldin, store director of the Sunset location. “For us, that means a great experience.”

Fred Segal moved its flagship store to the $300 million-plus Sunset La Cienega complex in October 2017. The mixed-use building includes retail space, apartments and a fitness center, among other amenities. The development was backed by Mid-Wilshire-based real estate firm CIM Group.

The flagship also hosts five to eight shops that are “in residency” at any one time in an area of the store designated as the “living room.” New and upcoming lines are showcased, along with trendsetters from elsewhere.

Fred Segal is known for its casual and chic vibe, and has a long heritage as a premier platform for emerging brands. It’s not immune to the troubles brick-and-mortar operations face in the rise of e-commerce.

“Online shopping offers convenience,” said Samek. “I think the only way to bring customers into a store is to offer something special, something different and something they can’t get online.”

Standard retailers’ revenues range between $300 to $400 per square foot, with higher-end brands taking in significantly more – Apple Inc. stores, for example, take in more than $5,000 per square foot, while Tiffany & Co. approaches $3,000, according to a recent report by real estate tracker CoStar Group Inc.

Lease rates for the various tenants are another area Fred Segal executives declined to discuss.

“Lease terms vary on a weekly, monthly and yearly basis,” Aldin said. “There are brands that come in here through Fred Segal directly or through our tenants.”