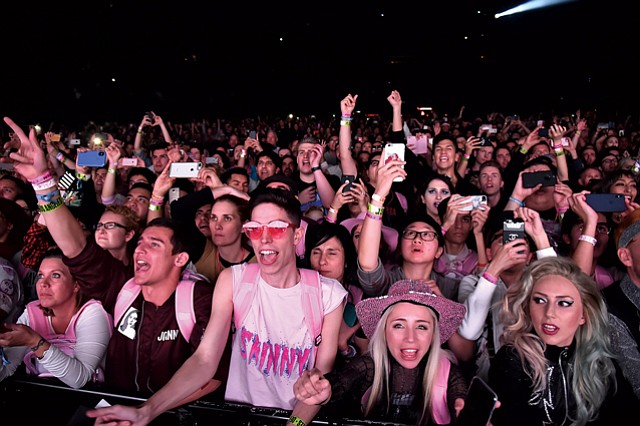 What did come up said even more, offering resounding notice that Live Nation has no plans to curb its ambitions.

“This year we expect to promote 20 of the top 25 global tours,” company president Joe Berchtold said during the call.

“We think we are somewhere in the 20 to 30 percent global market share” for promoting music concerts and festivals, added Chief Executive Michael Rapino, with a “huge opportunity” for growth.

The bid for global supremacy follows a domestic blueprint that has made Live Nation the U.S. live music industry’s inescapable force.

Of every 100 concert tickets bought on the primary market in the U.S., 80 are sold by Live Nation, according to trade publication Pollstar. Every person interviewed for this article said that Live Nation has a monopoly on the consumer-facing primary ticket market for arena-sized live music events.

The company’s hold on direct sales to consumers is backed up by exclusive licenses as primary ticket seller for 80 percent of the largest venues in the U.S. And then there’s Live Nation’s 60 percent share of the U.S. market for concert promotion services, such as bookings, logistics, sponsorships and advertising.

Little wonder Live Nation’s stock is near an all-time high, trading at $49.41 per share at market close Sept. 5, for a market capitalization of about $10.4 billion. The company notched $69.3 million in earnings on about $2.9 billion in revenue in the second quarter.

Last year’s revenue jump, however, was offset by costs that have come with legal challenges. An operating profit of $90.4 million for 2017 turned into a net loss of $6 million thanks in part to a $110 million settlement paid in late 2017 to Songkick, which contended Live Nation broke anti-trust laws by blocking its access to advance sale tickets and demanding a cut of its sales.

Live Nation followed the settlement with an acquisition of Songkick’s assets on undisclosed terms.

Those moves came a few months before the New York Times reported in April that the justice department is reviewing Live Nation’s compliance with a 2010 consent decree. The consent decree was put in place after Live Nation acquired Ticketmaster – the deal that pushed Live Nation’s share of the live music ticketing industry toward 80 percent.

The company could be in line for more scrutiny from the federal government thanks to Bill Pascrell and Frank Pallone, members of the U.S. House of Representative from New Jersey. The pair wrote a letter in July imploring the Federal Trade Commission to investigate if Live Nation is violating antitrust laws. Their letter was prompted by a U.S. Government Accountability Office report that found Live Nation tacks on service fees that routinely add 30 percent to the face value of a ticket. The only recourse for consumers, the congressmen contend, is the secondary ticket market.

“The live music ticket business isn’t as momentous as, say, the health care industry,” Pascrell spokesman Mark Greenbaum said. “But millions of people are still impacted by Live Nation in a negative way.” 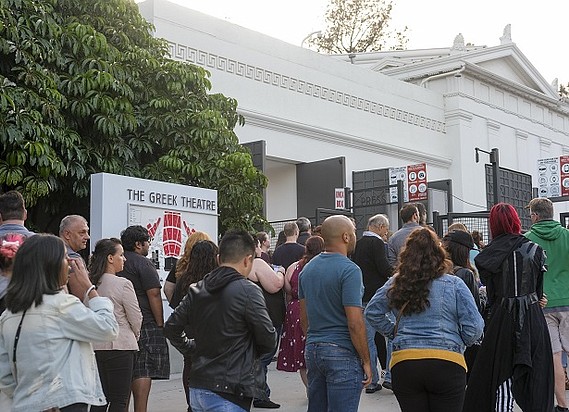 Eyeballs for Advertisers: Live Nation has an estimated 60 percent of the domestic market for concert promotion services, which includes sponsorships and advertising. Pictured: The Greek Theatre in Los Angeles. (Ringo H.W. Chiu/LABJ)

A few observers said Live Nation faces some competition in non-ticketing related areas, such as concert bookings in some major markets, including Los Angeles. Gigi Louisa Johnson, a music business professor at UCLA, called Live Nation more of an “oligopoly” in Los Angeles, vying foremost with Anschutz Entertainment Group Inc., a private company that owns the Staples Center, StubHub Center and other arenas around the world, and has its own ticketing and event promotion subsidiaries.

Madison Square Garden Co., which owns the Forum in Inglewood and the New York arena it is named after, among other venue holdings, is also independent from Live Nation, although it uses the company’s ticketing services.

An emerging competitor for Live Nation might be found in Westwood-based Oak View Group, which is helmed by Tim Leiweke, former president of AEG, and Irving Azoff, a former Ticketmaster chief executive.

Three-year-old Oak View Group has made inroads in the Seattle and New York markets – where it is redeveloping facilities for sports and other live entertainment – and has assembled a network of arenas that work on a cooperative basis on bookings and logistics.

Live Nation declined to answers questions for this story. The company did provide select market analyst reports from 2016 that give a glimpse of its trajectory.

Live Nation started in 1996 as SFX Entertainment, a venture created by radio and television magnate Robert Sillerman to consolidate regional concert promoters into one national company.

Clear Channel faced U.S. Justice Department antitrust division review by 2005 because artists claimed they had to to play at SFX Entertainment-promoted concerts in order to get their songs played on Clear Channel stations. The Justice Department review and the lackluster results from Clear Channel’s expansion plans – which also included billboard operations – led to a spinoff of SFX Entertainment, which renamed itself Live Nation.

Live Nation announced plans to merge with Ticketmaster in 2009, giving it the lion’s share of the domestic primary ticketing market.

Seventeen states including California filed a lawsuit that declared the merger created a live entertainment monopoly. Live Nation would control most of the primary ticketing industry, the litigants argued, and also possess an exceedingly high share of the concert promotion and venue industry.

The Justice Department antitrust division nonetheless approved the deal, although it imposed a consent decree on Live Nation, a measure the department said would prevent a monopoly and provide an opening for competitors to blossom.

The consent decree forbade the company from engaging in retaliatory actions, such as Live Nation telling venues they could not book Live Nation promoted talent if they did also not do their ticketing through its Ticketmaster subsidiary.

The New York Times story in April reported that the antitrust division is reviewing complaints from AEG, among others, that Live Nation is violating the consent decree.

Antitrust experts who have followed Live Nation since its acquisition of Ticketmaster contend that the consent decree in place is a weak enforcement tool: It prevents the stick of retaliation, but not the carrot of bundling, meaning Live Nation can offer, for example, a deal on company promoted artists to venues who use Ticketmaster.

“The market has changed little since the consent decree,” said Diana Moss, president of the American Antitrust Institute. “That’s a bad sign.”

Also, violating the consent decree does not lead to serious punishment for Live Nation, said Andre Barlow, a Washington lawyer who worked in the Justice Department’s antitrust division in the 1990s.

“Typically what happens if a government finds strong evidence of a consent decree violation is that they simply enter into another settlement agreement,” Barlow said.

The current head of the Justice Department’s antitrust division, Makan Delrahim, mentioned the Live Nation merger in a November 2017 speech to the American Bar Association.

Delrahim criticized his predecessor’s approach, suggesting that “simply” blocking a merger that might be illegal is preferred to consent decrees, which can impose conditions on companies that run counter to their business strategy.

“Delrahim seemed to suggest that if he were running the department at the time,” Barlow said. “That deal wouldn’t be approved.”

It’s unlikely the Justice Department will announce any steps in regard to Live Nation unless it announces the findings of a review.

“They are kind of a closed box in terms of information,” Greenbaum said.

There seem to be few other challenges on the horizon for Live Nation, with the most likely source of resistance, through a combination of business challenges and private litigation battles, being AEG.

Osbourne said he and other artists were subject to a tying agreement in which he could only play London’s giant O2 Arena, if the heavy metal rocker also performed at the Staples Center.

AEG retorted in part that they tied artists together in order to compete with Live Nation’s tying agreements.

Osbourne’s case survived AEG’s motion to dismiss, bringing the potential that each side will have to make details public on how they run their businesses – and perhaps give a clearer sense on how big Live Nation has become.

But most observers believe there are few competitive hurdles for the company.

“Live Nation has a growing share of a growing market,” according to a JPMorgan Chase & Co. investor report provided by Live Nation.

“The concert business has grown since the mid-90s. On the supply side, artists generally earn over 90 percent of their income through live performances and therefore are highly incentivized to tour.”

The investor report’s list of challenges to Live Nation are so general that any successful international company in any industry would be susceptible to them – a global recession, fluctuations in currency, or an act of terrorism at one of their sites.