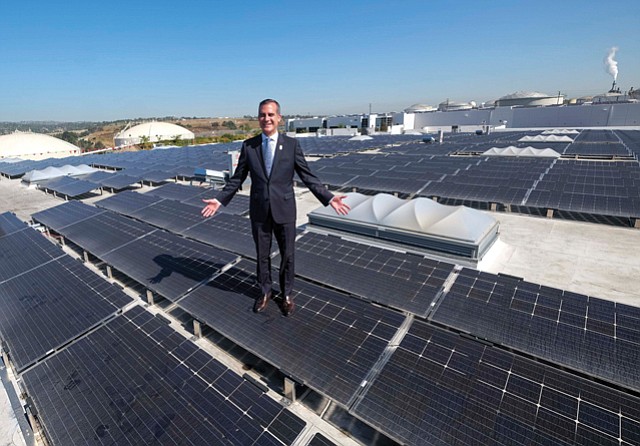 Politicians love to talk about making the Los Angeles area the clean tech capital of the state and the nation.

So how’s that going?

Pretty well, according to a recent report from San Francisco-based nonprofit think tank Next10, which ranks 26 metro markets in California on a series of environmental and clean technology indicators.

Turns out the Los Angeles/Orange County market ranks third in the state for the number of green technology patents in 2017, second in the amount of solar power capacity installed on residential properties, and first for the total dollar amount of zero-emission vehicle rebates.

The study included both the Los Angeles County and Orange County areas on most measures, in part because at the U.S. Census Bureau and other agencies that collect economic data frequently combined the two into a single metropolitan statistical area.

Next10 calls itself a nonpartisan organization focused on “innovation and the intersection between the economy, the environment and quality of life issues for Californians.” The organization and its research partner, Los Angeles-based Beacon Economics, were able to separate out Los Angeles County data for two indicators: the number of zero emission vehicles per 1,000 people; and the number of clean vehicle rebates per 1 million people.

Overall, though, Los Angeles trailed the Bay Area for both zero-emission vehicles and rebates, coming in third behind runaway leader Silicon Valley and second-place San Francisco.

The Los Angeles/Orange County market together also trailed Silicon Valley and San Francisco in the number of green technology patents and in the dollar amount of goods produced for every kilowatt hour of energy used.

The metro area also ranked as the third most productive market in the state terms of dollars of goods produced for each hour of electricity and natural gas used.

The Los Angeles/Orange County market managed to earn a spot in in the top half of the state’s 26 markets in all but one of 14 indicators Next10 used for its annual California Green Innovation Index.

“Los Angeles has shown quite a bit of leadership in clean technology coming out of the recession,” said Adam Fowler, director of research at Westchester-based Beacon Economics, which compiled the report for Next10. “The policies are in place to increase energy efficiency through new development infrastructure and retrofit programs for older buildings. There is also a great venture capital ecosystem for clean technology in Los Angeles.”

The lone indicator where the Los Angeles/Orange County market ranks close to the bottom (No. 22 out of 26) should be no surprise to Angelenos: commute time for vehicle drivers.

“People have to look for housing farther and farther out from their jobs because they can’t afford to live near their jobs,” Fowler said. 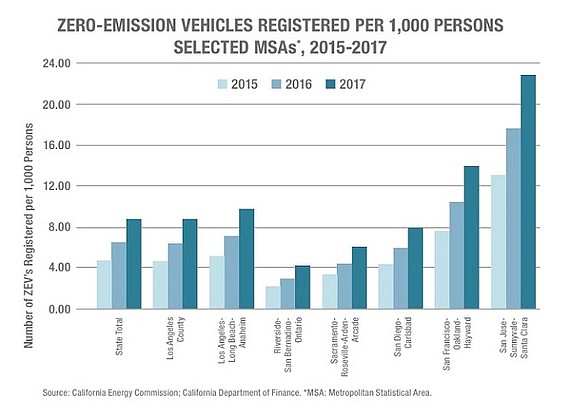 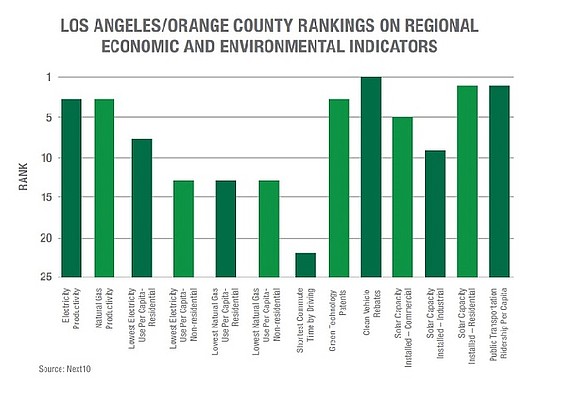 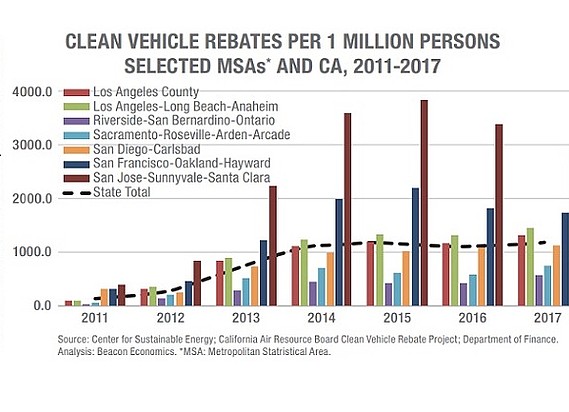