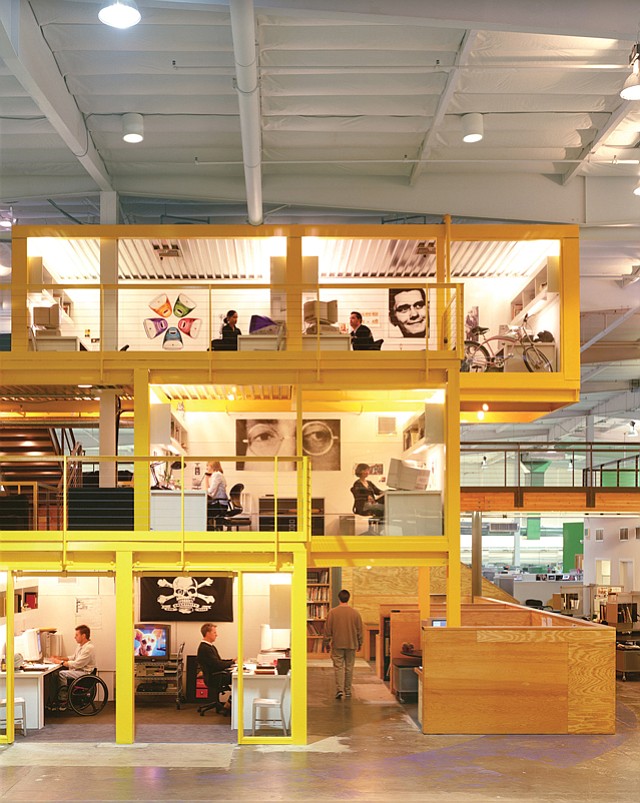 TBWA Chiat/Day Inc.’s Playa Vista offices may or may not have been the first creative office space in Los Angeles when they opened 20 years ago.

The first local splash came in 1998 when the ad agency debuted an open floor plan. It was an early version of what’s become known in the commercial real estate trade as creative office space – no cubicles or private offices to get in the way of a free flow of communication and ideas.

A write up on AOL.com online earlier this year still celebrated it as a “Wild Workspace.”

The 120,000-square-foot office, designed by Clive Wilkinson Architects in Culver City, opened with a basketball court, billboards and award-winning “nests” designed and manufactured by Steelcase Inc., along with a range of diverse structures used as meeting spaces, including tents for project rooms. The office reflected the casual, communal fishbowl milieu thought to have emerged in Silicon Valley tech startups beginning in the 1980s.

TBWA Chiat/Day said it hasn’t changed its open floor plan, but the concept of creative space is getting a few tweaks as it matures. Local office space providers and designers say being creative sometimes requires some peace and quiet – and that sometimes calls for a respite from details of your colleague’s visit to the doctor or latest Tinder date.

Los Angeles businesses report they are adjusting to new demands.

“Creative office space … is the most important aesthetic of our time,” Strano said. “When it started in the late 1980s, creative space was a boutique market. Today’s word is, if you don’t have creative space, your building is not going to lease.”

Strano said a creative space vibe has become essential for recruiting talent to businesses not commonly considered creative, including banking and law.

“(Job candidates) are looking for environment as much as what the salary is, an environment that is more people-friendly, as opposed to chopped up and divided,” Strano said. “It’s become a lifestyle need.”

Too close for comfort

A flurry of 2018 news stories in publications including Forbes and The Washington Post report research blaming open offices, reportedly now standard in 70 percent of U.S. workspaces, for decreased productivity, erosion of morale and even the spread of disease.

Ryan Jennemann, co-founder of downtown’s THC Design, doesn’t blame open offices for the spread of the common cold but said the company is struggling to find the right configuration for its 103,000-square-foot warehouse-turned-cannabis cultivation center.

“The issue with open spaces is sound,” Jennemann said in an email. “Even one person on the phone can distract someone else’s productivity. Even tech companies, which led much of the modern movement toward open offices, are starting to pull back on the concept. At THC Design, we’re experimenting with different models where there are open spaces for staff to congregate and share ideas but still have private places to focus and get work done.”

Some businesses aim to maintain open floor plans as they experiment with flexible additions, such as movable phone booths. The goal is to allow for collaboration and a place where workers can find the sound of silence in the same office.

Anthony Pucci, co-founder of Cubicall in Van Nuys, said he switched his business from specializing in luxury and fashion marketing to phone booths for creative offices about a year ago. The idea, he said was to provide flexible privacy options without structural changes for the open office.

The booths come in three sizes: the “Solo” for one standing occupant, “Standard” for one occupant with one seat, and the “Meeting Room,” which can accommodate four. Prices range from $6,000 to $12,000.

Pucci would not disclose revenue figures but estimated the potential U.S. market for booths and pods is 2 million to 3 million units industrywide.

“To put it into perspective, that’s about one booth per 25 employees,” he said.

He added that there are approximately five U.S. companies producing the booths.

One of those is Steelcase, maker of the “nest” workspaces for Chiat Day LA in 1998. Steelcase now offers freestanding enclosed “pods” in several sizes to accommodate one or several people.

“The demand for noise and distraction prevention in the open plan environment is high,” said Jan Carlson, Steelcase general manager of architectural solutions, in an email.

Kley Sippel, general manager of WeWork Cos. Inc. said the demand for occasional privacy has led the co-working space provider to include permanent phone booths in its large office spaces. He added that tenants of all office configurations prefer a communal entry and refreshment space rather than the in-office kitchens and food bars common to early “creative space” offices.

“Sometimes you want the energy and vibrancy of being in an open area, but it has be a little bit quiet. It can’t be by the soup line,” he said.

Elizabeth Brink, principal and Southwest regional director of Gensler in downtown, said the firm, known for designing high-profile open office spaces in the Los Angeles area, is seeing a trend away from the pool- and pingpong playroom aesthetic that marked communal office space in the 2000s – although she noted snacks and espresso drinks remain in high demand.

“It’s really more about purpose and connection,” she said.

Beyond that, Brink said, the key word with current clients is balance.

“People really do need their own spaces to work in, but there’s a demand for shared spaces as well,” she said. “Our privacy may not be a space that is assigned to you but a space that is provided if you need it.”

Brink said furniture, such as phone booths or pods, can allow that flexibility.

“Things are changing so rapidly for anyone who is running a business,” Brink said. “(They want) spaces that can adapt as things grow or shrink. We never plan a floor to have 10 offices for 10 vice presidents who are going to be on this floor forever.”