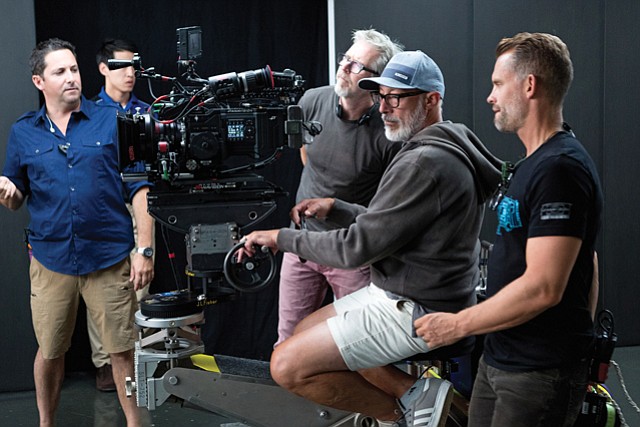 In Focus: Panavision camera in use on set of Netflix series “Instinct.”

Billionaire Haim Saban might once again be at the forefront of the entertainment industry’s future, ironically with a bet on a 65-year-old camera company that caught its break with “Ben-Hur.”

Woodland Hills-headquartered Panavision and Sim would form “a premier global provider of end-to-end production and post-production services in the entertainment industry,” according to the press release announcing the deal.

“They have identified a void in the marketplace,” said Elsa Ramo, an entertainment attorney at Ramo Law.

Saban Capital Acquisition was founded in 2016 and raised $55 million from a public offering at $10 per share with a plan to target media and entertainment companies that could flourish in the public market.

The Panavision and Sim combined acquisition was made with that $55 million plus $250 million cash in trust from Saban’s investment vehicle Saban Capital Group Inc., a $235-million debt raise and a $113-million equity stake from Panavision and Sim.

The deal is expected to close in the next 90 days, with the newly formed company using the Panavision name.

Representatives from Saban and Panavision declined to comment, stating it was too soon in the regulatory process to answer questions not addressed in Securities and Exchange Commission filings.

The filings show Sim with $115 million in 2017 revenue and $25 million in operating income.

And the filings depict a revitalized Panavision, recovering from years of debt and unresponsiveness to digital equipment developments.

Private equity group Cerberus Capital Management bought Panavision in 2010 with the aim to cut costs, and in 2012, Kim Snyder was hired away from the former Kodak Entertainment (now Kodak) imaging division to become chief executive, a position Snyder will retain in the reconfigured company.

Panavision has stayed afloat due to cuts, contracts with higher-end movies and television series – which make use of its comparably pricier equipment − and riding the wave of increased content.

The investor presentation grafts together Wall Street research to assert that in 2001, there were 182 widely distributed scripted movies and TV shows, with the total climbing to 487 by 2017.

“Panavision alone would not be an exciting growth play,” said Lloyd Greif, of Greif & Co., an investment banking firm.

But synergies from Panavision using the sound editors, visual effects supervisors, and other post-production workers at Sim, Greif said, and Sim using Panavision’s customer base – might drive significant growth.

The biggest post-production company is publicly traded Technicolor Inc., a France-based company that posted a $35-million operating loss in fiscal 2017 and whose stock price dropped from $7.48 at the end of 2015 to $1.05 at close of business Oct. 2.

Perhaps the second biggest is private outfit, Deluxe Entertainment Services Inc. in Burbank, which has announced 130 layoffs in the last three months, and recently consolidated its Los Angeles-area offices.

Technicolor declined comment for this article, and Deluxe did not answer questions about its office consolidation, layoffs or competition from Panavision.

Deluxe responded to questions with an emailed statement that read in part, “As a company at the core of the industry’s creation and distribution of content, Deluxe has been proactively transforming, anticipating shifts and innovating to address them,” including, “expanding our visual effects business globally.”

Setbacks at Technicolor and Deluxe would seem to open the door for the Panavision and Sim combination, but it could also show a fundamental industry instability.

“Post-production is a fast-evolving industry very susceptible to changes in technology,” Greif said. “It is not investment for the faint of heart.”

Entertainment deal-makers agree there are risks for the newly formed Panavision, even if overall content production continues to increase.

“We are living in a time of entertainment industry consolidation,” Ramo said. Consolidation could mean Panavision being the consolidator and creating its own post-production titan, Ramo said.

But it could also mean Walt Disney Co., Netflix Inc., and other major content producers, distributors and exhibitors increasingly doing everything in-house, the lawyer added.

Whatever its outcome, the Panavision deal is the latest turn in Saban’s already multifaceted career.

A 73-year-old Beverly Hills resident, Saban amassed a fortune through producing Power Rangers in the 1990s. He has a net worth of $4.3 billion, according to Business Journal estimates and ranked No. 15 on the 2018 Wealthiest Angelenos list.

Saban owns Saban Capital Group, which invested in family entertainment, plus an array of media ventures including Univision Communications Inc.

Saban cashed out of the Power Rangers in May, selling it and other entertainment intellectual property to Hasbro Inc. for $522 million.

Completion of the Power Rangers sale came as Saban was still searching for companies to acquire via Saban Capital Acquisition Corp., the first special purpose acquisition vehicle he has utilized for deal-making purposes.

Special purpose acquisition companies raise money by selling shares on the public market, in order to buy at least one company.

The deals can be advantageous to private investment, said Ramey Layne, an attorney at Vinson Elkins, because investors can hedge their bets by using money raised in stock buys.

SPACs, as they are commonly called, have increasingly become a part of the investment mainstream. According to SEC data, public offerings that use special purpose acquisition companies leaped from 10 in 2013 to 33 in the first eight months of 2018.

Mitchell Nussbaum, an attorney at Loeb & Loeb, said as the number of SPAC deals rose, a higher profile of investor has begun to utilize the vehicles for acquisition purposes.

“Much more sophisticated people have taken notice of it,” he said.