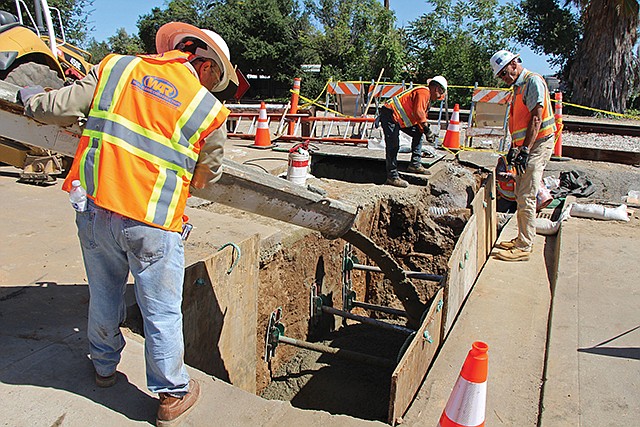 Cost of Gold: Construction timeline on the Metro’s Gold Line extension has been altered due to rising costs.

Rising construction costs are beginning to roil the L.A. building market, forcing some projects to be tweaked or restructured and construction companies to take steps to try to rein in costs.

There hasn’t been mass disruption of industry operations, but local construction contractors have been cutting internal costs, negotiating design changes in projects up front and passing on higher costs to subcontractors – all in their efforts to limit their exposure to the higher material prices and rising labor costs.

“We’ve had discussions with (project) owners about adjusting projects to accommodate rising costs,” said Scott Anderson, president of Charles Pankow Builders, a general contractor in Pasadena that focuses on building projects. “In most cases, we’ve been able to adjust design options to reduce costs.”

Part of the cost pressure comes from the region’s booming construction market and is a phenomenon that usually occurs at the peak of a building cycle. As more building and infrastructure projects enter construction, demand for skilled workers and construction materials soars, pushing up prices and costs, which in turn threatens to bust budgets and prompts a tightening of the reins. Such peaks occurred in the past around 2006, 1999 and 1989.

Tariffs imposed on steel, aluminum and lumber this year are also a contributing factor, according to industry sources.

One local company that often is a subcontractor on construction projects – South Los Angeles-based Giroux Glass Inc. – is having to cut costs to offset higher materials prices prompted by the tariffs.

Giroux spokeswoman Barbara Kotsos told the Business Journal last month that the tariffs have emerged as a double-whammy: The cost of the materials the company purchases has gone up, and there have also been delays as suppliers need more time to hunt for alternative sources for their materials.

But not everyone in the industry has felt the effect, yet.

“We’ve certainly heard a lot of noise about tariffs, but we haven’t seen a lot of increases directly attributable to the tariffs,” said John Gormly, president of Oltmans Construction Co., a Whittier-based construction contractor. “We have, on the other hand, seen more opportunistic price increases in recent years, especially after disasters like the hurricane in Houston last year.”

Larger project managers, such as Century City-based AECOM, build in safeguards against market turmoil, according to Jay Badame, the company’s president of building construction.

“Construction costs, such as materials and labor, can fluctuate due to a number of factors,” Badame said in the statement. “One of the advantages we have in particular to hedge against these market movements are the relationships our firm has cultivated. … Working closely with clients, design teams, suppliers and labor partners, we have unique insight into what is driving pricing and therefore can implement various methods to lock in certainty over a project’s lifecycle.”

One method, Badame said, is to “work with our subcontractors to lock in pricing prior to setting a price with our clients.”

In effect, this strategy pushes the problem of dealing with sudden price increases down the chain to subcontractors, who have to make their own adjustments to stick to their locked-in budgeted price.

The most dramatic example so far of prices influencing the local market came last month when the Foothill Gold Line Construction Authority, announced it would scale back its planned 12-mile rail line extension into San Bernardino County, citing the impact of rising materials and labor costs. The authority said it will instead speed up construction slightly on the first 8 miles and put off the final 4 miles until it can obtain more funding.

According to the authority’s Chief Executive Habib Balian, the bids earlier this year from four contractor teams came in much higher than expected, which made it impossible for construction to go on as planned.

“These factors resulted in the eight-year construction project costing hundreds of millions of dollars more than the secured funding available,” Balian said in a note to stakeholders last month. Specifically, he said, the overall cost jumped from nearly $1.6 billion to about $2.1 billion.

One of the two remaining bidding teams that will now have a smaller physical project to bid on is led by AECOM.

An AECOM spokeswoman said the company would not address the Foothill Gold Line Extension or any other specific contracts.

There have been more subtle examples of rising construction costs’ impact in Los Angeles. A potential buyer of a prime piece of real estate in Beverly Hills next to the Beverly Hilton hotel quietly dropped its bid, according to a local media report. Triple Five Group, of Edmonton, Alberta, cited rising construction costs and interest rates as factors, saying these increases would make building a hotel on the property cost prohibitive. The property was ultimately sold to Alagem Capital Group, of Beverly Hills – owner of the adjacent Beverly Hilton – and Cain International, of New York.

The biggest wild-card factor in the construction cost matrix has been the steep and sudden tariffs levied on steel and aluminum, both critical construction materials.

In March, President Donald Trump imposed a 25 percent tariff on steel and a 10 percent tariff on aluminum imported from China and several other countries; that roster of countries was expanded in June to include the European Union, Canada and Mexico. Steel is one of the most widely used materials in the construction of commercial, industrial and infrastructure projects, from support beams in commercial buildings to plate steel for bridge and road work. Aluminum, though less widely used than steel, is critical for items such as window assemblies and siding material.

“These tariffs are much steeper and more widespread than what we’ve seen in the past,” said Ken Simonson, chief economist of the Associated General Contractors of America in Arlington, Va., which lobbied against the imposition of the Trump tariffs. “But even more important was the speed with which they were imposed.”

Simonson said the suddenness of the tariffs caught many construction contractors and subcontractors by surprise, leaving them unable to take mitigating steps beforehand, such as finding alternative sources or changing designs to use less steel and aluminum.

In response to the changed market conditions, Simonson said, many domestic suppliers of steel and aluminum have also raised their prices this year, leaving no escape from the higher costs.

Lumber, a crucial ingredient for homebuilding, is also caught up in the escalating trade wars. Simonson said Canadian lumber prices spiked over the summer during the breakdown of trade talks between the United States and Canada.

Labor costs have also increased as demand has surged for skilled construction workers. “We are now at a record number of job openings in the construction sector nationwide: 278,000 compared to 175,000 a year ago,” Simonson said.

The labor shortages are most acute in highly specialized construction job categories, such as tunnel construction for rail lines, he said.

As a result, he added, many contractors are forced to hire less experienced workers and spend more to train them. In other cases, contractors are having their current workers put in more overtime hours, which also drives up costs.