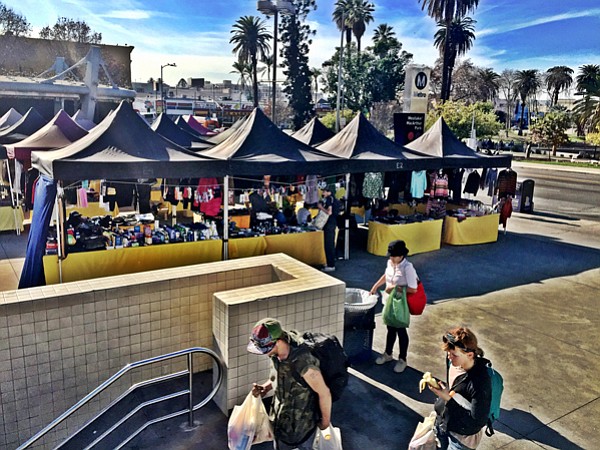 After a nearly decade-long campaign by street vendors for legalization and facing a deadline to act before a state law limiting the ability of cities to regulate sidewalk vending, the Los Angeles City Council on Nov. 28 voted unanimously to approve regulations for sidewalk vending.

The rules, which go into effect on Jan. 1, require the city’s estimated 50,000 sidewalk vendors to maintain minimum distances from driveways, curbs, building entrances, parking meters and other street features and they must be at least three feet from another vendor. The vendors must also pick up trash within 50 feet of their stands and ensure that people can pass on the sidewalks.

The motion passed by the Council also calls for permits to be issued for sidewalk vendors in certain zones with high concentrations of vendors, such as portions of downtown; those permits would begin to be issued in January 2020.

The measure designates several “no-vending” zones within the city, including within 500 feet of the Hollywood Walk of Fame, which was welcomed by the Hollywood Chamber of Commerce.

“We are elated that in the final ordinance adopted today, Council has included a no vending zone which will prohibit vending within 500 feet of the Walk of Fame,” Leron Gubler, chief executive of the Hollywood Chamber of Commerce, said in a statement. He noted that with the high volume of daily visitors to the Hollywood area, there are very specific public safety concerns surrounding the use of sidewalks and protection of the Walk of Fame.

Advocates for brick-and-mortar stores had pushed for the ability to veto vendors setting up shop in front of stores, but that provision was stripped from earlier versions of the measure. Business groups have since advocated for the strictest enforcement possible to ensure sidewalk vendors comply with the city rules.

The council action was welcomed by sidewalk vendor advocates.

“This is a huge step forward for thousands of entrepreneurs across the city,” said Rudy Espinoza, executive director of Leadership for Urban Renewal Network.

Councilmember Curren Price, co-author of the sidewalk vending regulation motion released a statement: “This is a win for the vending community, a gain for micro-entrepreneurs in pursuit of opportunity and the American Dream. (It is) justice for tens of thousands of immigrant and low-income Angelenos who work early mornings, late evenings and sacrifice weekends as sidewalk vendors. After years of hearings, compromise and healthy debates, we finally crossed the finish line. We can finally say, for the first time ever, Los Angeles will have a sensible sidewalk vending policy that is fair, enforceable and inclusive."

Business advocates said the measure is workable, though it could not meet all of their concerns because the city’s power to regulate has been limited by state law.

“Though severely limited in what they could regulate by Senate Bill 946, VICA commends the City Council for working within the limitations of this ridiculous state law to pass an ordinance that respects the concerns of the business community,” said Stuart Waldman, chief executive of the Valley Industry and Commerce Association.