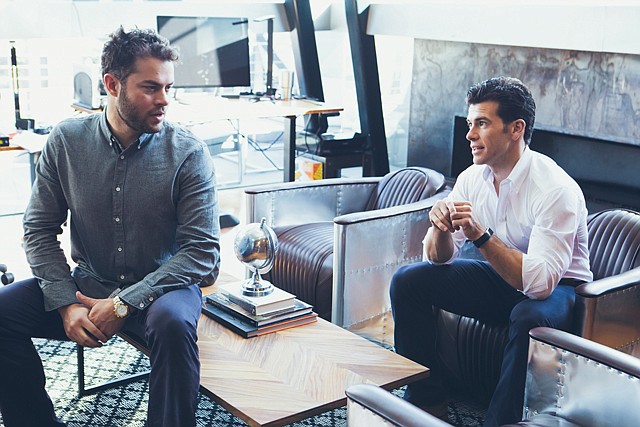 Land Grab: Greiwe, left, and Wallace have made inroads in the real estate tech scene. Photo by Fifth Wall Ventures

Fifth Wall Ventures co-founder Brendan Wallace is an advocate for new technologies and not just in his professional life as the managing partner of a venture capital firm focused on real estate technology.

Wallace, 37, typically zips the four blocks from his house to Fifth Wall’s Venice headquarters on a Lime scooter, one of the ride-share vehicles that have become almost ubiquitous in Los Angeles.

With Lime – which Fifth Wall invested an undisclosed sum in as part of a $70 million round in February – the firm is using its real estate connections and strategic partners to help the on-demand scooter company find parking for its bikes and scooters in high-density areas.

Privately held Lime recently inked a deal with one of Fifth Wall’s limited partners, Santa Monica-based Macerich Co., which announced plans this summer to help the company stage scooters in cities across the United States and internationally.

Macerich, the third largest mall operator in the United States, has plans to make Lime the exclusive scooter operator at its properties, including at Santa Monica Place, an open-air shopping mall located at the south end of the 3rd Street Promenade. Fifth Wall helped facilitate the deal, Wallace said.

Several similar relationships have been forged by Fifth Wall, which is investing out of an initial $212 million fund that closed in May 2017.

The firm is now in the process of raising for two more funds, which together are planned to be more than $600 million, according to filings with the U.S. Securities and Exchange Commission.

If the money is raised as planned, the company would have roughly $885 million in capital at its disposal, including $212 million raised in its first fund and $73 million of special purpose vehicles, or SPVs. An SPV’s assets are limited to the acquisition and financing of specific assets as a method of isolating risk.

If the new funds become oversubscribed – the firm’s first fund was, according to Wallace – Fifth Wall could wind up with over $1 billion in its investment pool.

The firm claims that its current investments have boosted its portfolio companies aggregate revenue by nine figures.

“We have delivered over $100 million in revenue to our portfolio of companies,” said Wallace of his firm’s investments’ impact.

In exchange for the buy-in, the partners get a return based on the performance of Fifth Wall’s portfolio companies. Fifth Wall gets the money, but the big-name backing also acts as a helpful tool when pitching startups because the close connection to these real estate giants can lead to secondary deals, like the Macerich/Lime partnership.

“They started to allocate real budget to technology,” Wallace said.

Fifth Ventures, as it was envisioned by Wallace and his co-founder Brad Greiwe, 35, aims to span the void between these mammoth-sized, legacy real estate companies and technology startups.

“We act as the bridge between the largest real estate companies on earth and real estate technology entrepreneurs,” Wallace said.

In the case of Lime, a real estate firm like Macerich sees the vehicles as a way to draw more consumer traffic to malls or highly urbanized areas like Santa Monica and Venice, according to Wallace. To be a destination for scooter riders, retail operations can build hubs to charge the scooters, driving traffic near their shops.

“The real estate market in L.A. is so conditioned by transportation, (more) than anywhere else in the world,” Wallace said, noting Lime plans to expand overseas eventually.

He refers to Fifth Wall’s Lime scooters investment and the 26 other commitments the firm has made as “digital touchpoints.”

“The touchpoints between real estate and technology could influence where you live or work,” Wallace said. “We believe transportation will dramatically impact all real estate asset classes and values in cities.”

Wallace and Greiwe earned their spurs in the world of high finance and met after their paths crossed while working indirectly for private equity firm Blackstone Group’s $4 billion public offering back in 2007.

“The core thesis of Fifth Wall came through Brad and I advising on technology in real estate with Blackstone,” Wallace said.

Wallace, who grew up in a real estate investment family in Manhattan, attended Princeton University where he studied politics and the economy, and wrote his senior thesis on the impacts of big stadiums and entertainment venues in large urban areas. He reluctantly confesses that he won the John G. Buchanan Prize in Politics while at Princeton. Established in 1909, it is awarded annually to the senior who has attained the highest “standing” in the politics department during junior and senior years.

Greiwe went the route of Harvard University, where he studied economics. He grew up in a prominent Cincinnati family that was also involved in the real estate business, and lived in the city’s Indian Hill neighborhood, considered the Midwestern city’s most affluent.