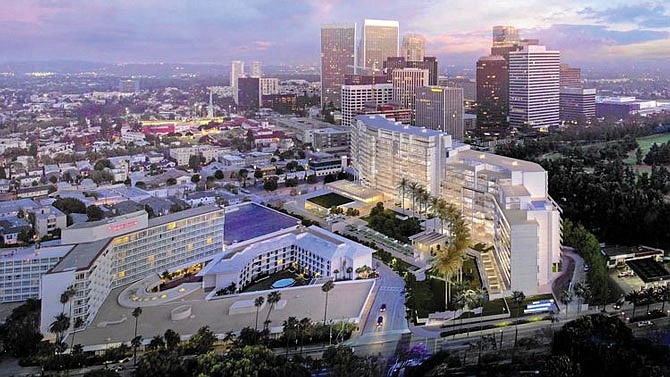 One Beverly Hills, one of many Chinese investments in the Southland that went on the market this year, has found a new owner.

Chinese conglomerate Dalian Wanda Group Co. Ltd. sold the property, which is still under development with no construction started yet, to London-based Cain International and Beverly Hills-based Alagem Capital Group for $420 million, according to a report in The Wall Street Journal citing a source familiar with the matter. The deal is expected to close this month.

“You don’t often get opportunities to invest in one of the great markets in America,” Cain International Chief Executive Jonathan Goldstein said. “Beverly Hills stands head and shoulders above most markets.”

Early plans for One Beverly Hills – a residential and commercial site located at 9900 Wilshire Blvd. – called for 193 condos and a 134-room hotel.

Wanda put the building up for sale earlier this year after the Chinese government tightened regulations on overseas investments. Other Chinese investments that went on sale this year include projects from Greenland USA, part of Greenland Group, and many of Anbang Insurance Group Co. Ltd.’s high-profile hotels.

Goldstein said they would be “looking to see what synergies can be created between the projects.”

Goldstein said Alagem’s knowledge of the area and what he did with the Waldorf Astoria are what made him interested in working together on One Beverly Hills.

Dalian Wanda and Alagem Capital did not respond to request for comment.

According to CoStar Group Inc., TA Realty paid $41.4 million for the 112,335-square-foot property, which houses a Superior Grocers, Starbucks and Ross Dress for Less store, among other tenants.

Even as many major retailers have been exiting or downsizing their physical footprint in recent years, CBRE’s Brummer said many commercial locations can still fetch a great price.

“This transaction once again demonstrates that high-performing grocery-anchored centers located within dense, infill trade areas continue to be in high demand, particularly from institutional investors,” Brummer said in a statement.

In one of the tightest industrial real estate markets in the country, Los Angeles-based Rexford Industrial Realty Inc. has snatched up two properties for $40.3 million in cash.

In Carson, Rexford acquired a 55,238-square-foot building on 5.41 acres for $16.1 million. Rexford will continue leasing the property to its current occupant, trucking operator Western Freight Carrier, which has signed a five-year lease.

Rexford also acquired two buildings on 8.28 acres in Carlsbad for $24.2 million. The industrial sites are each newly built and each have space for multiple tenants. Across the two buildings, which cover 114,572 square feet, occupancy currently sits at about 72 percent. Shea Properties Inc. was the developer, owner and manager of the property before the sale.

In the third quarter of 2018, Rexford Industrial reported rental revenue of $54.5 million, an increase of 26 percent over the year prior. With the new acquisitions, that figure is likely to continue rising.

DiPaolo will work on business development, broker training and recruiting.

Before joining Cushman & Wakefield in 2016, DiPaolo worked at CBRE as a broker.