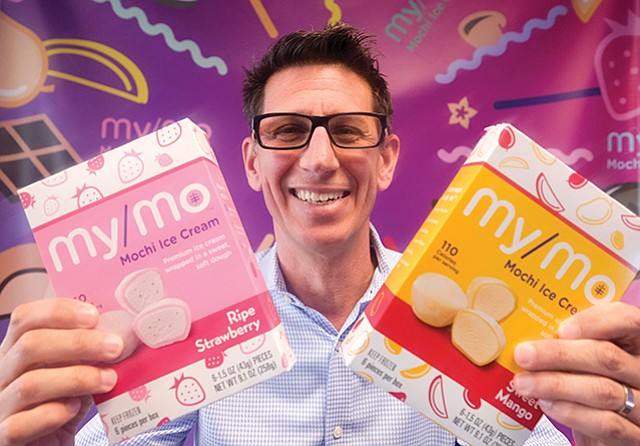 Taking a Japanese-inspired dessert popular in specialty stores and Asian grocers, and putting it into thousands of mainstream supermarkets seems to have worked out for Vernon-based Mochi Ice Cream Co.

The company now has its My/Mo brand – launched 18 months ago – in 12,000 stores, which has helped drive the ice cream mochi-maker’s revenue to a projected $50 million in 2018, with $100 million in retail sales. That revenue figure is up 40 percent since the March 2017 launch of My/Mo with the brand now making up the bulk of the company’s sales, according to Chief Marketing Officer Russell Barnett.

The strategy was implemented as part of a larger overhaul spearheaded by El Segundo-based private equity firm Century Park Capital Partners, which purchased the legacy mochi company in 2015 and rebranded it as Mochi Ice Cream Co.

“With the insights from Century Park Capital, the My/Mo brand was created to take a product that was previously seen as a very niche Asian item, available in flavors like green tea and red bean, and brought it to the masses in flavors that are more friendly to American consumers (such as vanilla, chocolate and strawberry),” Barnett said. “Today we are now 82 percent of the (mochi ice cream) category.”

Mochi, the Japanese rice dough dessert has existed for centuries, but mochi ice cream is uniquely American. The inventor of mochi ice cream, according to Barnett and media reports, was the late Frances Hashimoto, a fourth-generation Japanese-American Los Angeles businesswoman. Hashimoto’s family started the Mikawaya Co. in 1910 as a Little Tokyo-based confectionary company. The more than a century-old company was purchased by Century Park Capital in 2015 and rebranded as Mochi Ice Cream Co.

“We call ourselves the 100-year-old startup,” Barnett said.

The company is headquartered in Vernon with a 110,000-square-foot manufacturing facility and counts 150 employees on its payroll.

The quick push into freezer sections across the country turned some heads.

“That’s quick rollout; the question to ask is how they achieved it,” said Phil Lempert, a food industry analyst and owner of SupermarketGuru.com. “It has to be through promotional dollars – either slotting allowances and/or sampling in store.”

Mochi Ice Cream Co.’s marketing chief Barnett said the expansion was driven by several strategies: making mochi accessible; catering to the millennial market that likes to snack; and making more than one line of products, including vegan mochi ice cream that uses cashew cream instead of dairy.

The company’s strategy included adding flavor profiles to their existing line of products that included red bean, mango and green tea under the Mikawaya brand, which the company still operates. My/Mo offers vanilla, chocolate and strawberry, and other flavors familiar to less-adventurous American palettes.

Barnett compared the mochi phenomenon to what happened with Greek yogurt. The product wasn’t new, but it was made accessible in a way that it had not been before.

“We knew that if we talked about the product as ice cream, we would not be successful,” Barnett said. “We do make ice cream, but we chew it, so by default, the moment you chew, it becomes a snack. We were deliberately marketing this as a snack to millennials.”

That included having around 1,000 My/Mo small portable freezers nationwide in retailers close to the checkout registers ensuring the products had more than one access point from the middle of the store’s freezer section.

“That is a smart strategy to have the cases at checkout – but expensive,” food industry analyst Lempert said. “They would have had to give the retailers the cases and a promotional fee to place it there.

“It sounds to me like they are spending a lot of money. Mochi is a high-profit item, but the money has to come from somewhere first in order to recoup it from sales down the road,” he added.

Barnett emphasized the Mochi Ice Cream Co.’s social media presence, which includes 40,000 Instagram followers, and said its loyal fan base did half the work for them.

“Our line of sight is to get to a $100 million in revenue soon, and we’re already at the halfway mark,” he said.