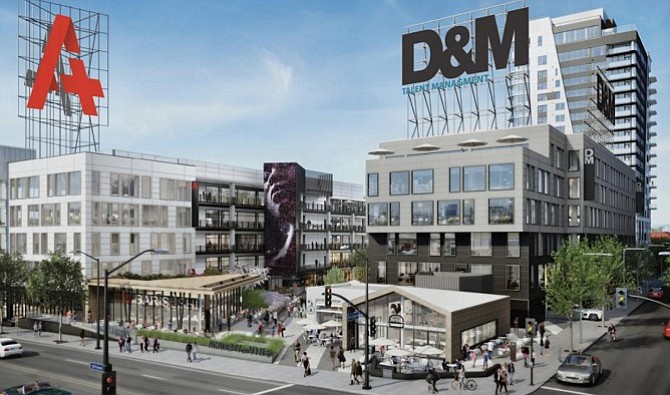 Rendering of Academy on Vine project in Hollywood

Netflix Inc. has signed yet another lease in Hollywood. The streaming giant signed a lease to take over the entire 355,000-square-foot commercial space at the Academy on Vine project in Hollywood, Kilroy Realty Corp., the property developer, announced Nov. 13.

The Academy on Vine is a mixed-use project covering 3.5 acres in a full-city block in Hollywood. Offices are currently under construction and 193 residential units are expected to start construction later this year. Once completed, the project will have three creative office buildings and a 20-story residential tower.

Los Gatos, Calif.-based Netflix is planning to move in mid-2020, marking the next stage in the company’s love affair with Hollywood.

“Our expansion into the Academy on Vine property further deepens our connection with the Los Angeles and Hollywood communities,” David Wells, chief financial officer of Netflix, said in a statement.

Netflix already leases 418,000 square feet at the Sunset Bronson Studios in Hollywood. Last month, the company signed an 11-year lease to take over all 13 stories at Epic, another building under construction in Hollywood. The Hudson Pacific Properties building is expected to be completed in early 2020.