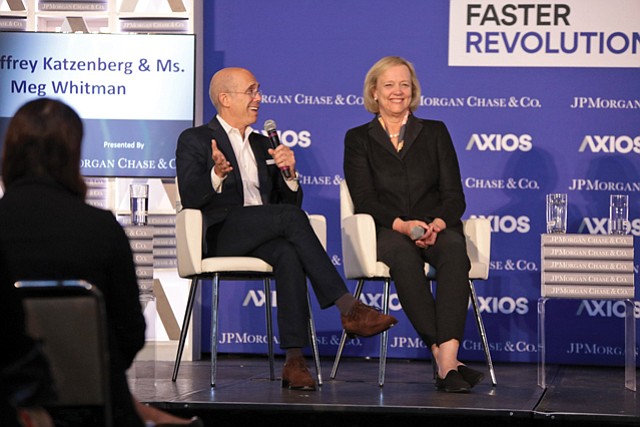 Prominent Position: Katzenberg and Whitman onstage at an Axios conference at UCLA Oct. 30. Photo by AXIOS

What does a restaurant-recommendation service, a long-form audio streamer located in the United Kingdom and a virtual private-network app have in common?

WndrCo announced in August $1 billion in funding for a short-form video platform devised by Katzenberg that he recently dubbed Quibi, which is due to launch public-facing offerings in late 2019.

Katzenberg has trumpeted Quibi in recent outings, including while appearing alongside Quibi Chief Executive Meg Whitman on UCLA’s campus Oct. 30 in a talk sponsored by Axios Media Inc.

Quibi has moved into a new office space at 959 N. Seward St., and it has disclosed it will distribute work made by high-profile directors including Guillermo del Toro and Sam Raimi.

But Katzenberg has not discussed WndrCo’s non-Quibi investments and acquisitions at these public events. WndrCo declined to comment for this story.

Katzenberg’s prior company, DreamWorks, was seemingly not as active in venture investing in his final years at the helm, according to data from CrunchBase Inc., save for a 2014 investment in a mobile technology company, Fingerprint Digital Inc.

What is publicly known about WndrCo’s investments suggest it has targeted material that might fit into Quibi’s platform of approximately six-minute videos, said Gene Del Vecchio, a professor at the USC’s Marshall School of Business.

“Little by little they are putting together the pieces of a much broader media and entertainment platform for consumers,” Del Vecchio said.

CrunchBase Inc. has tallied 12 investments and 3 lead investments WndrCo has so far made that are separate from Quibi. WndrCo’s lead deals were independently verified by the company that received the capital infusion.

The biggest by far of these lead investments was $295 million put into AnchorFree, a Silicon Valley-based company that created the app Hotspot Shield, which protects a user’s identity while they access internet content.

AnchorFree, as with the other companies that WndrCo invested in, declined comment, but it did put out a press release when the deal was done in September. The release noted Katzenberg and Jaswa joined the company’s board and that the financing would, “further product development and market expansion and drive M&A activity.”

The AnchorFree financing could, “tie in perfectly,” as a sponsor or partner with Quibi, said Vanessa Roman, an entertainment deal-making lawyer at Akin Gump Strauss Hauer & Feld, as it would appeal to smartphone consumers’ concern of getting hacked while watching videos.

WndrCo also in September led a $30 million private equity investment round into Infatuation Inc., an app that began by recommending New York City restaurants and has since expanded into two dozen cities. Infatuation acquired in May longtime restaurant reviewer Zagat Survey.

Infatuation plans to use the investment to expand the company’s, “long-term growth strategy, including launching in new cities, expanding its technology platform and product offerings,” according to a press release.

WndrCo’s other lead investment was a $11.5 million round for Mixcloud, a streaming radio channel that features DJ shows from established musicians such as David Byrne.

There are “vast cross-promotional opportunities” between Infatuation, Mixcloud and Quibi, Del Vecchio said, including, for example, five-minute videos featuring a restaurant or a touring musician.

Another synergy between Quibi and WndrCo’s investments, Del Vecchio noted, is the company’s repeated investments into Young Turks, a liberal leaning online news and lifestyle platform based in Mid-Wilshire.

Katzenberg has been a longtime donor to the Democratic Party, though Whitman, the eBay Inc. founder and former Hewlett Packard Enterprise Co. chief executive, was the Republican nominee for governor of California in 2010.

Other WndrCo investments, which were cross-checked between CrunchBase’s figures and a press release from when the deals were announced, perhaps make less immediate sense.

The company, for example, partook in a $7 million funding round for Rally Rd., a platform for investing in classic cars.

One possible tie-in is that veteran rapper Nasir “Nas” Jones was part of that funding round, as Nas’s manager, Anthony Saleh, is now a WndrCo partner, according to a press release tied to the Mixcloud investment.