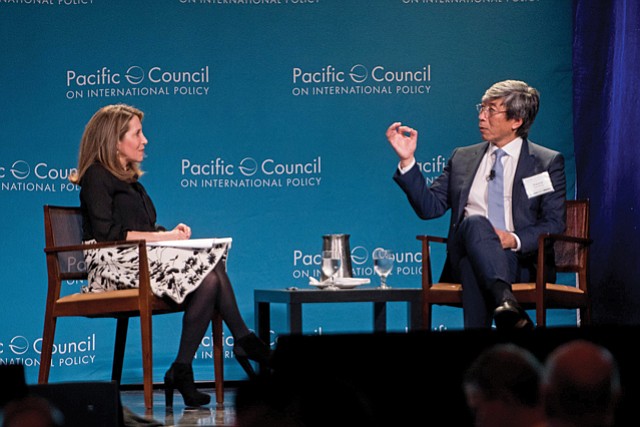 Soon-Shiong announced Oct. 12 that he would create L.A. Times Today, a 24-hour news channel, during an interview with former CNN White House Correspondent Jessica Yellin before a dinner audience at the Pacific Council of International Policy.

“We are going to launch our own TV network,” said Soon-Shiong, who completed the $500 million acquisition of the Times, San Diego Union-Tribune and other Southern California media properties from Tribune Publishing Co., formerly tronc Inc., in June. He did not elaborate on the channel content or when it would run.

There are no details yet on L.A. Times Today, according to Times spokeswoman Hillary Manning, who said in an email that announcements regarding the Times’ channel may be coming soon.

The biotech billionaire and chief executive of NantWorks also told Yellin that he wants to partner with The New York Times, The Washington Post and The Atlantic on a newswire service comparable to Reuters.

Soon-Shiong also did not offer details on the potential partnership.

He characterized such an alliance as a way to repair the Times’ reputation – Soon-Shiong said the L.A. Times became beaten down during Tribune’s ownership – and also a way to combat false information on social media platforms.

He drew a contrast with the Times and the Silicon Valley giants, noting the Times’ audience is the reader, but Facebook and Google serve their advertisers.

Soon-Shiong then said to audience applause that the Times needs to “take a step away from social media,” and even “create alternative options” to the dominance of Google and Facebook-owned platforms.

Manning said that the Times did not have anything to add to Soon-Shiong’s Google and Facebook remarks.

Donald Tang-owned studio Open Road Films snared an anonymous stalking horse bidder to acquire the bankrupt company’s assets from Tang Media Partners, but Tang may continue to have a foot in the door in Hollywood.

A bidder has agreed to buy Open Road Films’ assets from Tang Media Partners for at least $87.5 million, according to a Delaware bankruptcy court filing, triggering a Nov. 7 court auction on Open Road ownership.

The company declared Chapter 11 bankruptcy in September and has a $93 million debt load, according to court filings.

The company also has a controlling share in IM Global, which focuses on international movie distribution.

Messages left with Tang Media Partners went unreturned, and it’s unclear if Tang will keep these investments, buy a new studio or cash out of the entertainment business.

The tour starts Nov. 13 in Chicago, and it includes a stop at Los Angeles’ Forum Nov. 15.

Tickets at the Forum are going for between $129 and $2,750, according to Live Nation-owned Ticketmaster’s website.

Live Nation’s event announcement noted that “10 percent of ticket inventory in each market was set aside for various local organizations” such as “charities, schools, and community groups.”

The Forum in Inglewood is often the go-to Los Angeles venue for Live Nation and is in fierce competition with the Anschutz Entertainment Group Inc.-owned Staples Center downtown.

Earlier in the month, Live Nation announced Hillary and Bill Clinton “will take part in a series of conversations across 13 cities in North America.”

The tour will start in Las Vegas in November and then relaunch in April, including a stop at The Forum in May.

Forum tickets to see the Clintons, for now, cost significantly less than tickets to see Obama. They are currently priced at $59-$329, according to Ticketmaster.