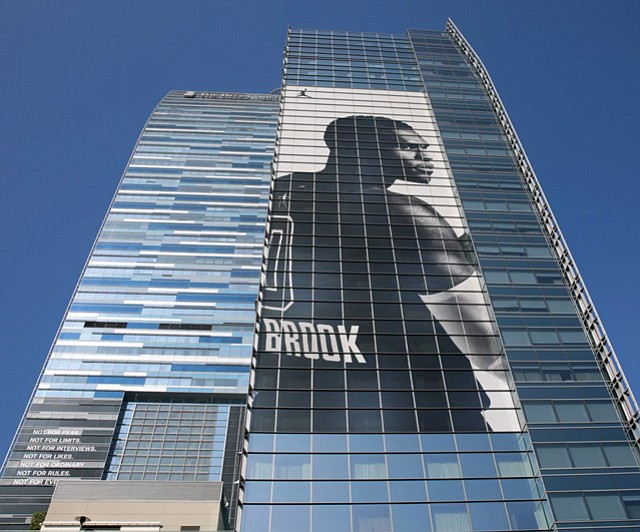 AEG Global Partnerships got off to a fast start on sponsorship deals this year, notching $95 million worth of deals in January and February, a period that got a boost from the presence of the National Basketball Association All-Star at the Staples Center.

The outfit is a unit of downtown-based entertainment and sports goliath Anschutz Entertainment Group, which owns and operates L.A. Live and the Staples Center downtown, the StubHub Center in Carson and various other venues. AEG also owns the Los Angeles Kings hockey team, the Los Angeles Galaxy soccer club and a minority share of the Los Angeles Lakers basketball franchise.

The company earlier this month disclosed the January-February hot streak on sponsorship, which was led by a deal that saw Nike Inc. spend an undisclosed amount on signage around L.A. Live during the February 16 to18 All-Star weekend.

The Nike ads featured UCLA veteran Russell Westbrook, now a star with the Oklahoma City Thunder, and the Jordan brand “Jumpman” logo. Both could be seen from various areas of downtown as well as the 110 Freeway.

“The entire world saw what AEG is capable of” during the All-Star weekend, said Russel Silvers, co-chief operating officer of AEG Global Partnerships. “We are fortunate that we are in the one of the biggest markets in the world, and for the big events, celebrity power is significantly amplified. The world takes notice.”

The deals with Kona Brewing and Kinecta were negotiated on behalf of the Galaxy and StubHub Center.

The Hawaii-based craft beer company now has an exclusive branded bar on the concourse in the StubHub Center.

Kona Brewing sought the sponsorship opportunity in large part based on the Los Angeles Chargers playing at the StubHub Center for two more seasons before taking up permanent residence at the Los Angeles Stadium at Hollywood Park, currently under construction in Inglewood, according to Nick Baker, who shares chief operating officer’s duties with Silver.

“We’re excited to announce our multi-year partnership with Jim Beam and welcome them as the Official Bourbon of the Los Angeles Dodgers,” Michael Wandell, senior vice president of corporate partnerships for the team, said in a statement. “Jim Beam is already a hit with our fans at Dodger Stadium, who are adding the new bourbon cocktails and a stop at the Jim Beam Bourbon Bar to their game-day lineup.”

Dodger Stadium has added the Jim Beam Bourbon Bar behind its right-field pavilion. There will be Jim Beam signage behind home plate and beneath the outfield scoreboard. The team also has agreed to place numerous vending machines for Jim Beam cocktails around the stadium.

CAA came away representing about 10 percent of the total draft class.

Sexton represents an agency high of 16 clients of the 25 players drafted.

CCA’s Todd France led the firm with six players drafted in the first round.