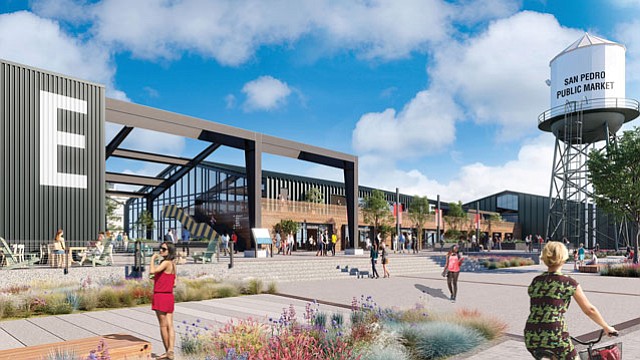 San Pedro is waking up.

Several new developments underway in the waterfront town have the potential to make it a regional tourism draw, according to Lorena Parker, the executive director of the San Pedro Historic Waterfront Business Improvement District, which represents commercial property owners.

The area got several boosts in the span of a little more than a week in March, when a new museum opened, a plan to build a Space Exploration Technologies Corp. factory got preliminary approval from the city, and the developer behind the construction of a $100 million retail center released new renderings of the project, which is expected to open in 2020 or 2021.

“You’ll be able to spend an entire day here,” said Parker. “Our town hasn’t normally been seen as Anaheim, a top tourist attraction.”

A national nonprofit dedicated to celebrating the history of American culinary traditions recently opened the new permanent home of its second museum about a mile from the San Pedro waterfront.

The Pacific Food & Beverage Museum is dedicated to the cuisine of California, the American West and the Pacific Rim.

The New Orleans-based parent organization, the National Food & Beverage Museum, had been offering talks, dinners and seminars in Southern California since 2013 but without a long-term home.

The organization chose San Pedro as its second location by the Port of Los Angeles, a gateway to the rest of the world’s cuisines, according to a press release.

The new exhibits include photographs of tattoos worn by bartenders and chefs by Louisiana artist Romney Caruso and an exhibit dedicated to exploring fine dining and drinking in the United States from the mid-1800s to World War I.

The news broke last month that the City of Los Angeles Board of Harbor Commissioners has given preliminary approval to an application by Hawthorne-based SpaceX to build a manufacturing facility for transportation vessels on an 18-acre abandoned site on Terminal Island.

The port location is necessary to convey the vessels, which would be too big to be transported on land to other locations, according to the board’s environmental report.

The facility wouldn’t be a tourist attraction, but the facility’s workforce, estimated at about 750 if the plan goes through, would add to demand for restaurants and other attractions.

Downtown-based developer Ratkovich Co. is meanwhile getting to work on building a $100 million San Pedro Public Market, a project long in the making on the other side of the channel from the proposed SpaceX site.

In order to make way for the project, which will include a public promenade, retail and restaurants, Ratkovich Co. began demolishing the waterfront retail district built in the 1960s, Ports O’Call Village, earlier this year.

Some of the business owners objected and resisted eviction, but to no avail since the project was approved by the county and city years ago.

However at least one business, the San Pedro Fish Market, has negotiated to remain during the construction and will move into a new location once finished.

The San Pedro Historic Waterfront Business Improvement District’s Parker, whose organization represents more than 300 unique commercial property owners in the area and runs the public trolley, said that she sympathized with the plight of the tenants but thought that ultimately the project would be a net gain.

“The L.A. Waterfront and downtown San Pedro was a fishermen town for many years,” said Parker. “There were a lot of decades when everything was stagnant. Now, even since they signed the contract (for the Public Market), we’ve seen interest from developers (and) businesses wanting to come to this area.”

All of San Pedro’s new offerings, as well as the long-time attractions such as the Battleship U.S.S. Iowa Museum, will allow visitors to spend an entire day in the area, Parker said.