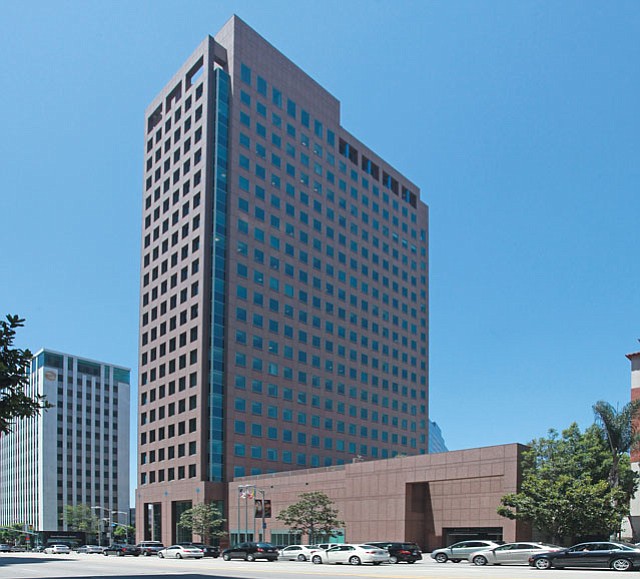 The 15,000-square-foot penthouse on top of the Center West building at 10877 Wilshire Blvd. in Westwood is getting its first tenant – 28 years after the building opened.

Irongate Capital Partners, a real estate investment and development company currently located across the street from the site at the Oppenheimer Tower, will move into the penthouse in the third quarter, according to Kambiz Hekmat, chief executive of Indivest Inc., the building’s developer and owner.

Irongate has signed an 11-year lease on the property, which offers a 23rd-floor balcony as well as 360-degree views that take in the Hollywood sign, the mountains and the Pacific Ocean.

Irongate was an attractive tenant because of its reputation as a builder of quality luxury hotels, its strong Southern California ties and “meeting our criteria for rent,” Hekmat told the Business Journal.

The penthouse has sat vacant since Indivest bought and developed the property in 1990. It had been offered to various tenants in the past, but no deal had ever been consummated until now, Hekmat said.

Irongate plans to bring its own touch to the penthouse.

“We gave them a healthy tenant improvement package to build out the space,” Gatti said.

Indivest develops luxury hotels both inside and outside the U.S. One of its recent hotel openings is Plaza La Reina, a six-story, Mission Revival-style luxury hotel and retail center located next door at 10850 Lindbrook Drive in Westwood.

Among Irongate’s other projects include the Trump International Hotel Waikiki in Hawaii, the Aspen One mixed-use luxury development in Colorado, a Four Seasons resort in Costa Palmas, Mexico in Baja California and the Ritz-Carlton Residences in Hawaii.

Chinese investment in Los Angeles commercial real estate reached its lowest level since 2012 last year, with a 67 percent year-over-year decline in acquisitions by Chinese investors as well as a 90 percent decline in hotel volumes, according to a Cushman & Wakefield study.

Total investment in the Los Angeles market from China and Hong Kong slumped to $446 million in 2017 from $1.4 billion the previous year, the study said. Much of 2016’s gains were driven by $1.2 billion in hotel investments, according to Cushman & Wakefield.

Capital controls imposed by China’s government have been cited as a reason for the pullback.

Among the more high-profile local impacts of Chinese regulators has been Dalian Wanda Group’s decision to sell its Beverly Hills development located across the street from the Beverly Hilton hotel.

Smaller categories have held up among investors from China – office acquisitions rose to $134 million, their highest level since 2014, and industrial volumes were the highest since 2015, hitting $109 million.

The overall dip in spending also was reflected nationwide, with investments from China down 35 percent to $29 billion last year, with $7.3 billion into commercial real estate transactions – 55 percent lower than in 2016.

The Museum of Contemporary Art, Cedars-Sinai Medical Center, Brookfield Properties and Los Angeles World Airports have been recognized for water and energy efficiency at the Fourth Annual Innovation Awards.

The awards were handed out March 26 by the Los Angeles Better Buildings Challenge, a network of commercial buildings whose owners and managers are focused on city-sponsored goals of energy and water efficiency.

MOCA was given the Energy Efficiency Project of the Year award, cutting its energy use by more than half at its Grand Avenue location.

Cedars-Sinai won the Water Efficiency Project of the Year award for the first-of-its-kind groundwater reuse system, which carries an estimated a savings of 27 million gallons of water per year.

Brookfield Properties won the Portfolio Project of the Year award for its LED lighting retrofits and water-efficient landscaping throughout its 9 million square feet of downtown Los Angeles office space.