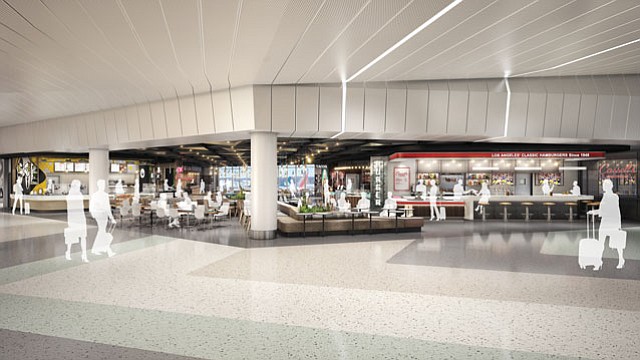 Los Angeles World Airports worked with mall operator Westfield Corp., which was acquired in December by French commercial real estate firm Unibail-Rodamco, to furnish the terminal with 20 new dining and shopping concessions that emphasize a sense of place, according to the airport’s director of public relations, Becca Doten.

“LAX is the first and last thing people will see when they come to the great city of Los Angeles, and we want to make sure they experience everything it has to offer, including our dining and retail culture,” Doten said in an email. “Airports are gateways to countries and cities, and we have an opportunity to create a unique experience that connects travelers to our city, and at the same time create the most seamless, stress-free experience possible.”

The local dining concepts expected to open by the fall include Cassell’s Hamburgers, which has a location in Koreatown, along with Hawthorne-based coffee roaster Urth Caffe, and Trejo’s Tacos, a chain recently started by actor Danny Trejo.

New retailers will include a MAC cosmetics store and Kiehl’s skincare concession, both based in New York.

The airport’s total revenue from food and beverage concessions is expected to increase about 10 percent this year to $25.4 million from $23 million in 2017, according to an estimate from its 2018 budget.

The $508 million makeover of Terminal 1, known as the Southwest Airlines Co. terminal, is part of the multi-billion dollar capital improvement project the airport is undertaking through 2024. It began in 2014 and has been completed in phases, with the final additions expected to finish by the end of the year.