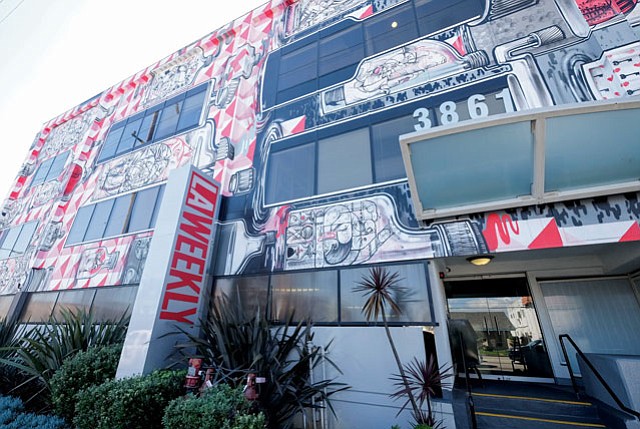 LA Weekly will have a new office in downtown Los Angeles, new editorial staff and a new lineup of events by summer, according to its publisher.

And, no, the 40-year-old alternative weekly isn’t going out of business.

“That’s honestly laughable to me,” Publisher Brian Calle said. “We’re tracking revenue the way that we want to track.”

Calle declined to offer any specifics on financial performance, which likely took a hit after the 11th-hour cancellation of its March 25 The Essentials event, which commemorates the Weekly’s annual list of its favorite 99 Los Angeles restaurants. The cancellation was the second event nixed since Semenal Media, a new ownership group headed by Calle, purchased the paper from Voice Media in November for an undisclosed sum.

The event cancellations –coupled with several longtime advertisers announcing publicly they were withdrawing ads – have raised questions about the Weekly’s staying power in an already troubled industry.

Matthew Cooperstein, the Weekly’s last publisher under Voice Media ownership, also declined to give specific revenue numbers from his tenure, but said events were important to the its balance sheet.

“When I was there, The Essentials event was profitable and an important extension of our restaurant coverage,” Cooperstein said. “We were very reliant on events.”

Some of any revenue lost on event cancellations could be defrayed by another, more literal move: Calle said the Weekly – which was listed as having free distribution of about 160,000 per issue as recently as 2016 – is looking for a new home after Semenal opted not to renew the lease on its headquarters at 3861 Sepulveda Blvd. in Culver City.

Calle said the operation plans to move to an unspecified location downtown this July from their two-story building on the Westside.

“The lease was not a good decision,” Calle said of a 10-year-deal set to end around the middle of the year. “The building was way too big for LA Weekly, and it has been for a very long time.”

The event and ad cancellations in the wake of Semenal Media’s Weekly takeover, were, at least in part, influenced by Boycott LA Weekly, an informal network of protesters whose grievances include that nine of 13 Weekly editorial staff members were let go amid the ownership change. The cuts – along with Semenal Media’s Orange County ties and a roster of backers with conservative leanings – sparked vitriol and spawned the boycott campaign.

“The straw that broke the camel’s back,” Calle said, was “one of the chefs from one of the restaurants who called our food editor, Michele Stueven, in tears and said that they were threatened and harassed.”

Other chefs and sponsors, Calle said, were “bullied and scared” by people associated with Boycott LA Weekly. Calle declined to name any of the purported harassment victims, making verifications of the claim difficult.

David Welch, another Semenal partner and the Weekly’s chief operations officer, said that the paper would not provide information on advertisers, “There are a group of misfits out there violently threatening advertisers.”

Former LA Weekly contributor Jeff Weiss, who has helped lead the Boycott LA Weekly charge, said Calle and Welch are lying about the threats, and that they turned the paper into a “civic laughingstock.”

“I don’t believe their allegations,” Weiss said. “Nothing they’ve said has a touch of veracity, and I don’t see why they’d start now.”

Welch, a Los Angeles attorney who specializes in the cannabis industry, claimed the harassment was “criminal,” but that LA Weekly has not pressed charges against protesters, and that he is not aware of any advertisers who have filed criminal complaints. The office of the Los Angeles City Attorney said that they didn’t know of any pending investigations against Boycott LA Weekly members.

Print media ownership changes – followed in many cases by layoffs – have been commonplace in Southern California in the last year. Local biotech billionaire Patrick Soon-Shiong’s proposed purchase of the Los Angeles Times from parent company tronc Inc. received the most headlines when announced in February, but there’s been a slew of other transactions, including Southern California News Group’s acquisition of the Orange County Register and Hour Media Group’s purchase of Los Angeles magazine.

Former Weekly publisher Cooperstein – now with his own digital marketing company, called Light Up Marketing – said that he has watched the paper’s new ownership from afar.

“I truly don’t think they are trying to sabotage the paper,” Cooperstein said. “But they should have planned out their moves a little more at the beginning.”

In general, Calle said, the paper has lured back businesses who pulled their ads in the immediate wake of Semenal Media’s purchase and even attracted new advertisers. Calle did not respond to repeated requests for examples of new or returning advertisers, however.

Calle also said the Weekly would bolster its editorial staff, stating that he expected three newsroom hires in the “next couple of weeks.”

The publisher is not sure what will comprise the Weekly’s new menu of events but promised a reboot in coming months, with less of an emphasis on culinary themes and perhaps more on other arts.

A concern Boycott LA Weekly members expressed with Semenal Media was that investors including Calle were from Orange County and would be out of touch with the paper’s history and editorial mission.

Another concern about editorial coverage came as eyebrows were raised when Hock + Hoof, a downtown Los Angeles restaurant t

hat the list of top restaurants in “The Esssentials” issue despite the fact it had yet to open for business.

Both Welch and Calle dismissed any suggestions of pay to play on the annual issue.

Calle, meanwhile, said he intends to continue to engage the challenge of finding a future for the publication.

“No one has been able to figure out a way forward for alternative weeklies,” Calle said. “For me, that is part of the attraction of the venture, figuring something out. I’d be hard pressed to point out someone who is doing