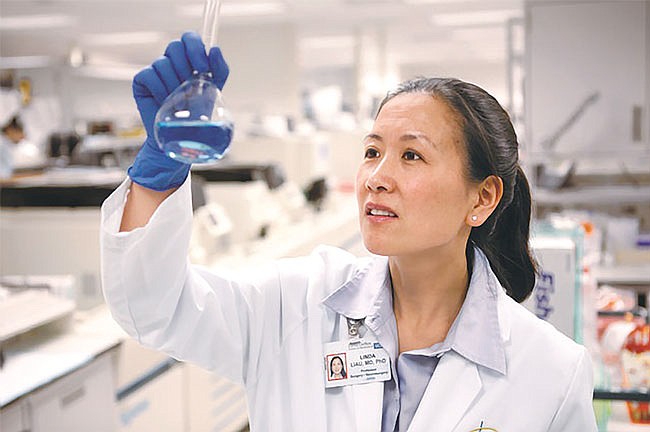 Jung then cranked out another prostate cancer drug – Erleada, now owned by Johnson & Johnson – approved for sale early this year. It could turn out to be another biotech blockbuster.

“With all good science, eventually you need a product at the end,” the chemist, who has spent 44 years at UCLA, said June 13 to more than 500 research scientists, biotech industry professionals, financiers and students who turned out for an inaugural UCLA Biomedical and Life Science Innovation Day.

The event staked the Westwood campus as a cornerstone for L.A.’s emerging biosciences sector.

“How did this all get started? With a question: ‘How do we position L.A. as a hub for biotech innovation?’” said Amir Naiberg, associate vice chancellor and chief executive of UCLA Technology Development Group, which hosted the day as part of its mission to promote campus research, patents, commercialization and startups.

“This event is all about building an ecosystem,” Naiberg added.

The university, which files more than 400 scientific disclosures a year, stressed a culture of collaboration among scientists who bump shoulders on the smallest footprint of all nine UC campuses.

Research scientists were moved beginning in May to UCLA’s newly renovated South Tower, a former hospital converted into a 443,000 square-foot medical research lab.

“The discoveries made on our campus have impacted health worldwide … from Hercepten to Gleevec, from PET technology to curing ‘bubble baby disease,’” UCLA David Geffen School of Medicine Dean Kelsey Martin said to the audience June 13. “Join us as we try to bring new discoveries and inventions to the marketplace, for the betterment of humanity.”

Jung and Daniel Geschwind, a professor in neurology, received an Amgen Early Innovator Award for advancing research into Alzheimer’s disease.

Jung, in return, turned to a room full of drug financiers and drug makers from Amgen Inc. to Kite, a Gilead Co.

“Come and talk to us,” said Jung, with a trace of a native New Orleans twang, as he ran down dozens of compounds UCLA is developing to treat chronic illness. “Let’s get together, and let’s make drugs for fun and profit, legally.”

An international study led by UCLA researchers found that a personalized vaccine may help extend the lives of people suffering from glioblastoma, the deadliest form of brain cancer.

The vaccine, known as DCVax-L, harnesses a patient’s own white blood cells to help activate the immune system to fight cancer. Nearly a third of those involved in the ongoing trial have survived at least three years – compared to an average life span of up to 17 months for people diagnosed with the disease.

The research was funded by Northwest Biotherapeutics Inc., of Bethesda, Md., and the National Cancer Institute.

“The survival rate is quite remarkable compared to what would be expected for glioblastoma,” said lead author Dr. Linda Liau, professor of neurosurgery at UCLA’s medical school and a member of the UCLA Jonsson Comprehensive Cancer Center.

In short, the new vaccine teaches the immune system how to fight the cancer.

“The unique thing about the DCVax-L vaccine is that it doesn’t target a single antigen,” Liau said. “This treatment actually uses a patient’s own tumor specimen to make the vaccine.”

UCLA also drew more than 700 adults and children from across Los Angeles this month for a first-ever CPR Palooza on how to help victims of cardiac arrest.

The free training in hands-on CPR Skills hosted by UCLA Health and the Los Angeles Lakers filled the UCLA Health Training Center June 2 at the home of the National Basketball Association team in El Segundo.