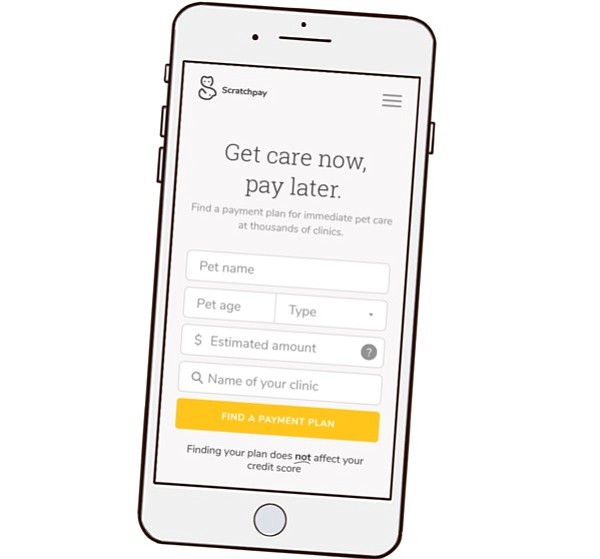 Eagle Rock’s Scratch Financial Inc., doing business as Scratchpay, announced June 19 that it received $6.4 million in series A funding. Underwriting for this round of funding was provided by Companion Fund, a $100 million pet-centered venture capital fund, as well as Struck Capital, TTV Capital and SWS Venture Capital.

Founded by John Keatley and Caleb Morse, the company aims to make pet care less expensive to by offering an app to compare payment plans for visits or medications. Originally, the company filed with the Securities and Exchange Commission as an LLC, but converted to a C corporation last year. Scratchpay’s financing options include no interest, APR, or credit check, according to a recent press release. Scratchpay reports that since their founding in 2016, more than 2,000 pet hospitals have adopted the use of the app.

“Fifty-three million pets today aren’t able to get the care they need as costs continue to increase even faster than human healthcare costs, and that’s the problem we’re aiming to solve,” said Keatley, co-founder and chief executive of Scratchpay. “Our mission is to remove the financial barriers that prevent pets from getting care.”

The American Pet Products Association reports that in 2017, owners spent a total of $17.1 billion on their pet’s medical needs. The APPA estimates that $18.3 billion will be spent this year. The health of the pet often is more important to owners than the steep billing. USA Today reported in May 2018 that 11 percent of millennials told surveyors they would pay up to $10,000 in vet bills, while the average response was $2,000 per visit. And, according to a May 2017 report by CBS News, California is one of the most expensive states in the United States for vet care, with the average bill in 2017 totaling upwards of $1,500.