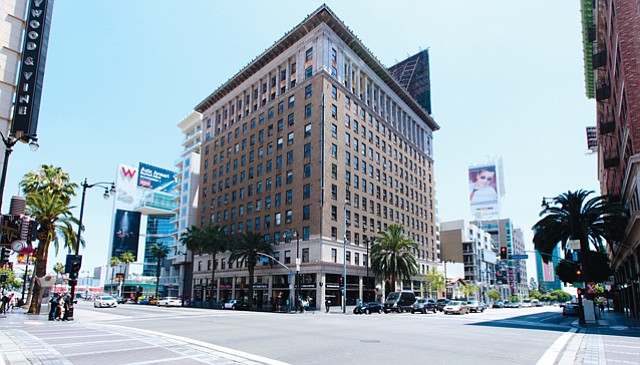 The Taft Building, located on the famed corner of Hollywood and Vine, has been sold in an off-market transaction to a joint venture of El Segundo-based developer Ocean West Capital Partners and Westbrook Partners of New York for approximately $70 million, according to sources.

DLJ bought the office high rise in 2011 for $28 million and put $15 million worth of renovations into the aging property. DLJ features the Taft Building on its website’s home page.

The Taft was built in 1923 and its most recent renovation prior to DLJ’s ownership occurred in 1987, according to CoStar Group Inc.

The building once housed the offices of Charlie Chaplin, Will Rogers and the Academy of Motion Picture Arts and Sciences. It has been designed a Los Angeles Historic-Cultural Monument.

The Taft also is located near the 101 freeway and the Los Angeles County Metropolitan Transportation Authority Red Line’s Hollywood/Vine station.

It was designed by the architecture firm of Walker & Eisen, which also designed the James Oviatt Building in downtown Los Angeles and the Beverly Wilshire Hotel in Beverly Hills.

Hollywood has become one of Los Angeles County’s hottest office real estate markets. Vacancies plunged to 9.4 percent during the first quarter of 2018 from 17.3 percent in the year-ago quarter, according to data supplied by Jones Lang LaSalle Inc.

There was more than 157,000 square feet of net absorption in Hollywood during the first quarter