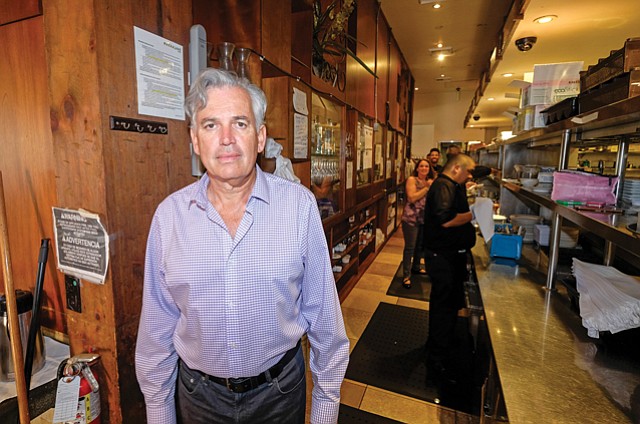 As the minimum wage increases again next month in Los Angeles to $13.25 an hour for larger companies, local restaurateur Selwyn Yosslowitz says he’s running out of ways to cope.

For the first two rounds of minimum wage increases, Yosslowitz, co-founder of seven Marmalade Cafe restaurants – including two in Los Angeles – reduced the hours worked by his staff, laid off some of his 500 workers and outsourced most of the back-office operations.

Now, he said he’s trying to get his vendors and suppliers to reduce their prices and he’s looking at taking items of the menu that he believes customers won’t pay more for.

“After this, we will have done as much as we can on this front,” Yosslowitz said.

Business owners like Yosslowitz say they are encountering difficulties despite the strong economy and overall high demand for labor that has pushed the county’s unemployment rate down to 4.4 percent, the lowest in at least 50 years.

Local economist Christopher Thornberg, principal with Los Angeles-based Beacon Economics, said if businesses are facing problems with minimum wage requirements in these overall favorable economic conditions, other underlying problems were likely to blame – either in the way the businesses themselves are running their operations or in their specific industries.

“Right now, the biggest issue for businesses is not being able to find enough workers,” Thornberg said. “Only a small minority of companies are experiencing the opposite problem of having too many workers. And even if they are having this problem, with the economy as good as it is, they ought to be able to raise their prices, because consumers will pay more.”

Also, he said, the minimum wage increases have been known for years, giving companies plenty of time to adapt.

Yosslowitz is one among many employers with large percentages of their workers earning at or just above minimum wage who are trying to keep other costs in check amid a steady stream of minimum wage increases. They are also weighing whether to raise prices for the goods they sell.

On July 1, the minimum wage for companies in the cities of Los Angeles, Santa Monica, Malibu and unincorporated Los Angeles County with 26 or more employees jumps to $13.25 an hour from the current $12 an hour. It’s the third annual minimum wage increase for these companies on the road to $15 an hour by 2020.

The minimum wage for companies in those cities with 25 or fewer employees jumps to $12 an hour from $10.50 an hour; their increase schedule lags a year behind their larger counterparts.

As the wage keeps ratcheting up, the number of companies facing crisis points keeps rising, according to Patrick Nye, regional director for the Los Angeles Small Business Development Center Network, based in Long Beach.

“We’re definitely getting more businesses coming to us this year scrambling to figure out how to make this work as the minimum wage levels keep going up,” Nye said. “It’s a pretty regular flow now.”

Nye acknowledged that the minimum wage increase schedules have been public knowledge and that many companies have been able to take steps to avoid financial difficulties. But he said many small business owners are facing other pressures, such as rent increases, rising workers’ compensation costs and – in certain sectors such as apparel and retail – very tough market conditions.

The most common tactic taken by business owners, he said, is to reduce working hours, typically by cutting one hour per day for workers at or near minimum wage.

One strategy that Nye said many business owners had been expecting to implement was to raise prices for their products. Some major companies have done just that: earlier this month, San Diego-based Jack in the Box Inc. cited the statewide minimum wage increase as it announced it was raising the price for its two tacos menu item to $1.29 from $0.99.

Other companies, however, have encountered problems when trying to raise prices, Nye said.

“That may have been the original plan, but now they are finding it’s more complex and their ability to raise prices is more constrained than they thought,” he said.

This is the case for many in the retail sector, where brick-and-mortar stores are struggling to survive as customers migrate to e-commerce, he said.

Barraza said that he has both reduced working hours and laid off some workers to cope with the previous rounds of minimum wage increases. His staff is now at around 60, down from a peak of about 200 a decade ago; roughly 40 workers earn at or just above minimum wage.

“I was able to handle the previous wage increases but this one is proving particularly difficult,” he said.

Adding to the difficulty: the building he is in sold last year and the new landlord upped his lease payment by 25 percent to $15,000 a year. “Rents are going up like crazy in this general area,” he said.

Now, Barraza said, he’s focused on cutting out the sales reps and other middlemen in the chain to sell directly to consumers online.

Another apparel maker has responded to the minimum wage increases by eliminating much of the contract sewing work for third parties and outsourcing some of the sewing of their own garments.

“It is increasingly difficult for us to absorb these wage increases and keep prices in line with what the market demands,” said Alon Zeltzer, president of downtown-based XCVI Fashion. “So we have to cut costs wherever we can.”

Zeltzer said XCVI used to have 60 people sewing in house; now the company has fewer than a dozen, with the rest of the work outsourced locally to other garment manufacturers.

“While there have been other reasons for the outsourcing, I can tell you that the increase in the minimum wage is a big part of it,” he said.