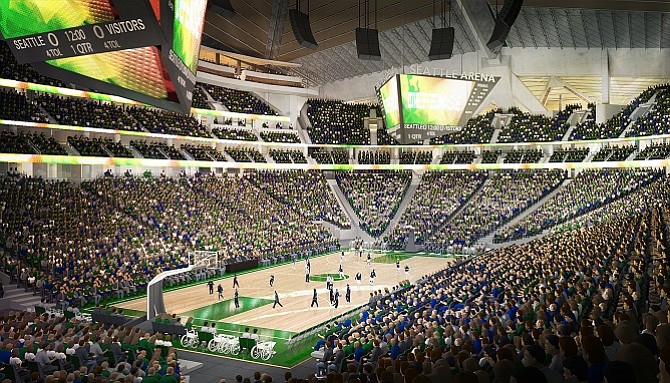 Rendering of the KeyArena in Seattle

Oak View, the Westwood-based sports and entertainment facilities venture formed by Tim Leiweke and Irving Azoff, said that AECOM and Sweden-headquartered Skanska would be put in charge of construction, which is set to begin in the fall of 2018.

How much Oak View and other investors will pay for AECOM and Skanska’s services was not disclosed.

The Seattle City Council approved Oak View’s plan for the arena, which will be renamed Seattle Center Arena, with the expectation that Leiweke, former president of Anschutz Entertainment Group Inc., will bring a National Hockey League expansion team to Seattle.

The NHL has not approved a hockey team for Seattle, but NHL Commissioner Gary Bettman has recently mentioned the possibility of a Seattle hockey team. Seattle city officials also voiced optimism that Oak View could bring back the National Basketball Association to the Emerald City.

AECOM’s numerous sports facility construction projects include work on Los Angeles Stadium at Hollywood Park, which will serve as home to the National Football League’s Rams and Chargers.