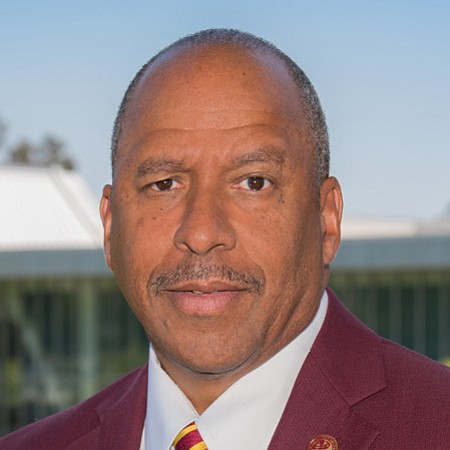 Thomas Parham took office as president of Cal State Dominguez Hills in July, after serving as vice chancellor for student affairs and an adjunct faculty member at the University of California, Irvine. He was at UCI since 1985, and previously was on the faculty at the University of Pennsylvania in Philadelphia. The licensed psychologist served on the City of Irvine’s Human Relations Committee, where he helped draft the city’s first human rights ordinance, which was passed by the city council. He served as chair of UCI’s Martin Luther King Jr. Symposium for 10 years. He participated in the 2005 State of the Black Union, which was hosted by Tavis Smiley and aired on C-SPAN, and appeared in the 2010 documentary “Fair Game?” by Mario Van Peebles.

My proudest moment was bearing witness to the birth of my youngest daughter, Kenya, and being a father to her and my oldest daughter, Tonya.

My undergraduate alma mater is the University of California, Irvine, where I received my bachelor's degree in social ecology.

My next project is to continue to cultivate greater interest and investment in the California State University, Dominguez Hills campus and the students we are committed to teach, mentor, and support.

My heroes are my mother, Sadie F. Parham, and women everywhere who continue to carry a disproportionate share of the burden for raising and supporting our families.

What I like best about Los Angeles is the Southern California weather and lifestyle mixed with the aesthetic ambiance of a truly high-powered, diverse, multicultural environment.