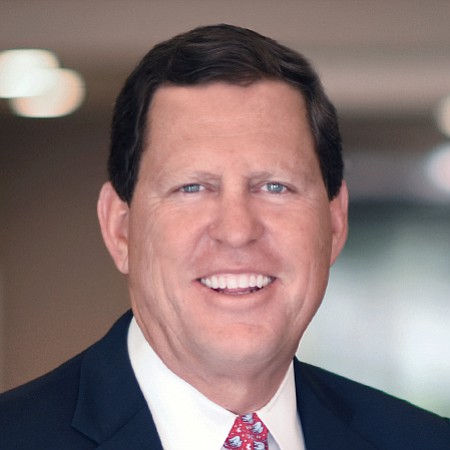 Christopher Myers joined Citizens Business Bank as president and chief executive in 2006. CVB Financial Corp, the holding company for Citizens Business Bank, is among the largest bank holding companies with headquarters in California, with $8.4 billion in total assets as of the end of the first quarter. Citizens Business Bank provides a wide range of banking, lending and investing services through 51 banking centers and three trust offices throughout California. CVB announced plans earlier this year to acquire Pasadena-based Community Bank for $878 million, a deal that would boost assets of the combined company to about $12.4 billion on a pro-forma basis as of the end of 2017. The deal was recently approved by shareholders of both companies and is expected to close in the third quarter of 2018. Prior to joining Citizens Business Bank, Myers served as chairman and chief executive of Mellon First Business Bank. He serves on the boards of the California Bankers Association and the UCLA Anderson School of Management’s Fink Center for Finance and Investments

My proudest business moment was being recognized as the No. 1-rated bank in the nation by Forbes in 2016, in terms of overall financial performance.

Our next project is the completion of our merger with 74-year-old, Pasadena-based Community Bank. The deal will make Citizens the eighth-largest independent bank headquartered in California, increasing our total assets to more than $12 billion. We expect regulators to approve the merger sometime in the third quarter of 2018, at which point Community Bank will operate as Citizens Business Bank.

I have numerous heroes. Here goes. Athlete: Magic Johnson. I went to college in Boston in the early 1980s and the Lakers-Celtics rivalry was legendary. Magic transformed the game of basketball. Business: George Borba Sr. George was the founding chairman and principal shareholder in Chino Valley Bank back in 1974, which later became Citizens Business Bank. He was basically my boss for my first seven years as CEO. His commitment to his faith, family, and business were unrelenting and always built for the long-term. If you shook his hand on a deal, it was done. I always slept comfortably at night knowing he was behind me, 100 percent. Personal: My wife Laura leads our family and keeps me and our three grown kids close. She never forgets to reinforce that family comes first.

I love the weather and the accessibility to so many diverse things: Beach, mountains, desert, coastline, sports, music, theater. From a business perspective, Los Angeles is the epicenter of California, the 7th largest economy in the world by itself. We have a well-trained and diverse workforce, access to national and international markets, and tremendous natural resources. Los Angeles is also a hub for higher education and my alma mater, UCLA.