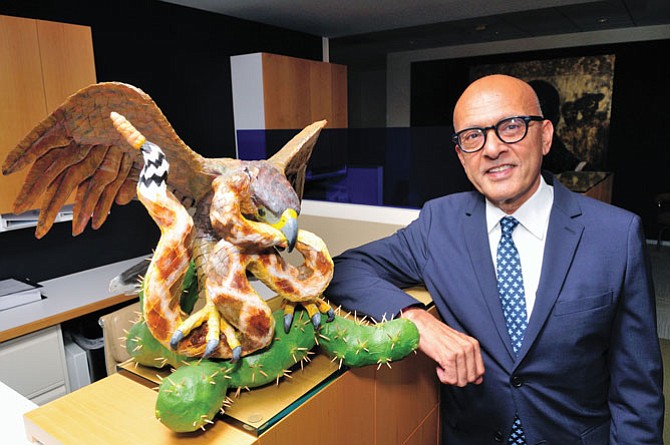 Walter Ulloa, chief executive of Spanish language broadcaster Entravision Communications Corp. is No.2 on the Business Journal’s annual list of the 100 most profitable public companies on the LABJ Stock Index in 2017. Photo by Thomas Wasper

The Business Journal’s annual list of the 100 most profitable public companies on the LABJ Stock Index in 2017 showcases the diversity of industry in the greater Los Angeles County area.

“This list has a very healthy mix of companies,” said Lloyd Greif, chief executive of Greif & Co., a middle market investment bank in downtown Los Angeles. “It speaks to the strength and diversity of the local economy.”

It’s also more diverse than last year, when four of the top 10 companies on the list were real estate-related.

This year’s top 10 cut a wider swath, covering as many as 10 sectors – a ticket seller in Studio City and a Santa Monica-based broadcaster could be considered in separate industries or together in media; and both No. 4 Marcus & Millichap Inc. and No. 9 Public Storage could likewise be viewed as separate sorts of enterprises or both be considered real estate concerns.

The list measures profitability using a formula that calculates return on equity over the three-year period of 2015 through 2017.

No. 1 on the list was HemaCare Corp., a Van Nuys blood provider, with a three-year return on equity of 48 percent. The company turned profitable in 2017 as sales surged 43 percent in 2016 and 46 percent last year.

Two entertainment-related companies – Tix Corp. of Studio City and Entravision Communications Corp. of Santa Monica – followed in the No. 2 and No. 3 spots, respectively. Tix Corp., a ticket seller, is an example of how profits can fluctuate dramatically over three years. The company, which focuses on ticket sales in the Las Vegas market, had a very profitable 2015, but posted losses last year as it faced increasing competition from Las Vegas entertainment venues and Live Nation Entertainment Inc.’s Ticketmaster.

No. 3 Entravision, a Spanish-language broadcaster, had a better three-year performance after acquiring several broadcast outlets that enabled it to expand its digital presence.

Marcus & Millichap’s No. 4 ranking maintained its status as a perennial member of the upper ranks of the list in recent years, not surprising given its low asset levels and low fixed costs as a commercial real estate broker that arranges sales and purchases for investors rather than buying property itself. Greif cited the combination of low assets and low fixed costs as favorable conditions when it comes to return on equity.

Label manufacturer Avery Dennison Corp. retained the No. 5 spot on the list. Chris Kapsch, an analyst with Aegis Capital Corp., highlighted the Fortune 500 company’s successful moves in a report on Avery a year ago, saying it had consistently beaten earnings estimates, expanded revenues through acquisitions and maintained robust margins in its main label and graphic materials division.