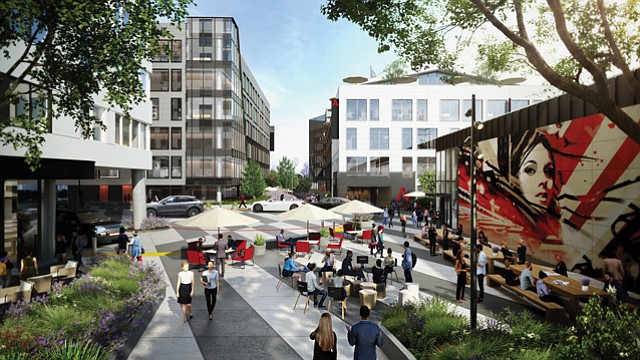 Office development in Los Angeles County soared in the second quarter, with nearly 2.7 million square feet of office space under construction – an increase of 25 percent from the prior period and around 40 percent compared with a year earlier.

The trend continues in line with the overall commercial real estate market in Los Angeles County, which showed continued strength from April through June since the same period in 2017.

The asking price of Class A office rent grew 8 cents quarter over quarter despite the higher vacancy rate, particularly because enough new, higher-end Class A office construction came onto the market to drive up rents and offset the negative effects of more vacancies. Compared to the same, year-ago period, Class A rents rose 13 cents on average countywide to $3.75 per square foot.

L.A. County net absorption – the net change in occupied space over a period of time – turned negative at nearly 13,500 square feet as the vacancy rose to 14.1 percent from 14 percent in the first quarter.

The net absorption rate fell due to so much new office space being built, with more than 1 million square feet – about 41 percent of all countywide construction – rising on the Westside.

In the Tri-Cities submarket of Burbank, Glendale and Pasadena, net absorption became a positive metric over the April through June period for the first time since the third quarter of 2017.

Overall, the building activity helped boost total office inventory in the county 0.3 percent, or roughly 512,000 square feet, to more than 193 million square feet in the second quarter from the prior quarter.

Cranes crisscrossed the skylines throughout the county, but especially on the Westside and in Hollywood.

Kilroy Realty Corp. broke ground on The Academy on Vine in Hollywood, a $450 million project that will take up an entire city block south of the Cinerama Dome, a district where 813,000 square feet of space was being built in the second quarter, making it the county’s second hottest area for new office environments.

The county’s busiest area in terms of office construction was the Westside. More than half of its more than 1 million new square feet was in Culver City, home to the Culver Studios redevelopment and the Culver Steps project by Hackman Capital Partners. Meanwhile, Rockwood Capital is at work building the third and final office component of Water’s Edge in Playa Vista.

Onni Group is upgrading a 1920s-era office building at 1031 S. Broadway in downtown, and soon will begin renovation of the Los Angeles Times building at 202 W. 1st St. now that its namesake tenant has relocated much of its staff to El Segundo. Hearst Corp. and Georgetown Co. are redeveloping the Herald-Examiner Building at 1111 S. Broadway, also downtown, into creative office, restaurants and shops.

The South Bay added more than half a million square feet of new office space emerged in the second quarter. Most of that construction was in El Segundo, including Boeing Co.’s expansion within the city. And developers Smoky Hollow Industries and Limo Co. are planning to erect 200,000 square feet of new space for creative office tenants as well as light industrial companies in the city’s Smoky Hollow district.

But it’s a tricky time for construction, which, being the execution of plans that have spent years in the public approval process, comes at a time of rising interest rates and tariffs on steel, said Eric Kenas, market director of research at Cushman & Wakefield.

Developers continuing to build despite such delayed time lines is a sign of confidence in Los Angeles County as a market, he added.

The growth of the coworking industry – led by companies such as WeWork Cos. Inc., Industrious and Spaces – is lowering vacancy rates in certain submarkets, according to Josh Wrobel, a managing director at Jones Lang LaSalle Inc., which provided the second-quarter office and industrial markets’ statistics. (See list of coworking companies, ranked by L.A. County membership, page 20.)

Industrious signed a lease for 40,000 square feet across two floors at 1925 Century Park East in Century City in the second quarter. The company says it has 315 L.A. County members, or people paying Industrious to rent space.

Hollywood, Santa Monica and Century City already have vacancy rates in the single digits, and other submarkets might soon dip into single-digit vacancy territory if the popularity of coworking spaces continue to grow, Wrobel predicted.

There is currently about 2.8 million square feet of office space used for coworking countywide, with nearly 43 percent is on the tech-heavy and venture capital-rich Westside, according to JLL data.

“Coworking is going to follow where the high rents are, and where the industry drivers are concentrated,” said Henry Gjestrum, senior analyst of office research at JLL.

Arup Engineering’s decision to move its regional office from Playa Vista to downtown’s Wilshire Grand building is another sign of the area’s attractiveness as a market, observers said.

Commercial real estate does face headwinds, however, one being potential ramifications from a trade war between the U.S. and China that threatens to drive up construction costs and soften consumer confidence, said Ryan Harding, an executive managing director at Newmark Knight Frank.

L.A. County’s industrial market remained tight in the second quarter, with a 1.4 percent vacancy rate unchanged from the prior quarter. Industrial rents rose 7 cents from a year earlier to 84 cents per square foot. The South Bay was the most expensive submarket at 95 cents per square foot, up 10 cents year over year.

Rents have increased about 50 percent over the last five years, and landlords now want tenants tow sign longer leases, often in the seven-to-10-year range, according to Zac Sakowski, an executive vice president at JLL.

“Because we still have such a low vacancy rate, tenants continue to show a willingness to pay those rates,” Sakowski said.

Those tenants include major retailers in need of warehouse space, such as Nordstrom Inc., which leased 512,000 square feet of industrial space at 20333 Normandie Ave. near Torrance, a building owned by a Morgan Stanley & Co. fund.

Irvine-based Sares-Regis Group’s plan to convert some of the former Toyota Motor Sales U.S.A. Inc.’s headquarters in Torrance to industrial from mostly office space should soften the blow of the automaker’s relocation to Texas, given the high demand for industrial real estate. Torrance’s 17.1 office vacancy rate in the second quarter increased 5 percent over the quarter.

“The Toyota effect we were all expecting isn’t going to be as harsh,” said Devon Parry, a senior research analyst at JLL.