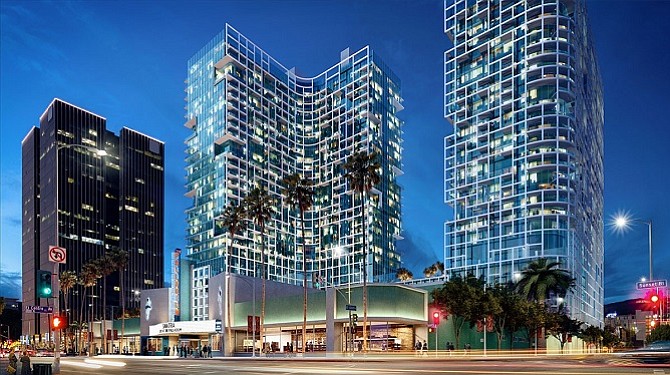 Rendering of the Palladium Residences in Hollywood

Los Angeles city officials followed state environmental laws when they approved the Palladium Residences, a pair of 30-story, 731-apartment towers near the Hollywood Palladium on Sunset Boulevard, a judge has ruled.

The decision by Los Angeles County Superior Court Judge Amy Hogue is a victory for Miami-based Crescent Heights Inc., the developer behind the hotly contested project, according to the Los Angeles Times.

AIDS Healthcare Foundation, which is seeking to block the development, has vowed to appeal. The Hollywood-based nonprofit has been active in seeking to place limits on local real estate development. In 2017, it backed Measure S, which would have limited the Los Angeles City Council’s ability to change rules for zoning and planning for developments. Voters rejected that ballot measure.

Crescent Heights plans for 864,000 square feet of new development on the site. The City Council approved the plan in 2016. Critics have called the project too large and would aggravate Hollywood’s traffic.