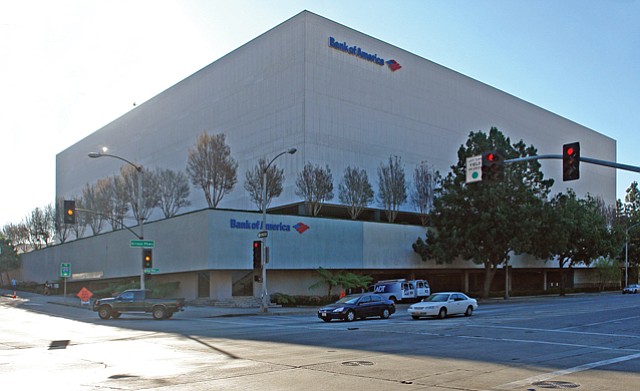 Bank of America Corp.’s departure from a six-story office it has occupied in Pasadena for nearly 45 years will bring challenges beyond the hundreds of jobs that also are expected to disappear from the area.

The pending move will leave a renovation project and a big chunk of vacant space in its wake at a time when Pasadena’s office market has been more steady than hot.

The 346,000-square-foot windowless building at 101 S. Marengo Ave. has been home to more than 1,000 employees. It was built in 1974, when computers took up thousands of feet of office space and many more employees were needed to process the everyday work of banking.

An estimated 575 of the workers at the office are now slated for layoffs, while 560 others will be consolidated into two existing offices located a few blocks apart on Brand Boulevard in Glendale and other Southern California locations, according to company spokeswoman Colleen Haggerty.

The vacancy on Marengo Avenue could bring a test for the Tri-Cities market, made up of Pasadena, Glendale and Burbank. The Tri-Cities hit historic peaks in the 1980s, regularly absorbing 1 million square feet of office space per year as new office towers were built, according to Bill Boyd, chief strategist and negotiator at Charles Dunn Co.

The area has absorbed an average of nearly 47,000 square feet per year since 2009, according to data provided by Jones Lang LaSalle Inc. A good year typically sees nearly half a million square feet of absorption per year, according to JLL.

There hasn’t been any new office construction in the submarket since the first quarter of 2015, according to JLL, a dearth that could help Har-South Marengo Avenue, the Westside-based limited liability company that owns the property on Marengo.

Indeed, the soon-to-be vacant building would nearly account for a good year all by itself – a prospect that could come to fruition if initial interest pans out.

Harvey Bookstein, a partner and co-manager of the building, said some would-be tenants have made offers for a lease of the entire property.

The owners are considering a renovation as well as the possibility of taking on multiple tenants but “have no specific plans as to what we’re going to do with the property,” Bookstein said.

“They’d be fortunate to get that price now without a lease in place,” said Boyd.

Boyd called the property “a great site,” but suggested significant upgrades are in order.

A rehabilitation to current market standards could present a different potential. Similarly-sized buildings in line with current standards have traded for $325 per square foot, he noted.

Charlotte, N.C.-based Bank of America isn’t downsizing its office space in a vacuum.

Citigroup Inc. is vacating roughly 65,000 square feet at Citigroup Center at 444 S. Flower St. in downtown Los Angeles, to take a 29,000-square-foot lease at nearby One California Plaza. Its lease on Flower Street was signed more than 30 years ago, according to Thomas Ricci, managing principal of development and construction at downtown-based Coretrust Capital Partners, Citigroup Center’s landlord.

Citigroup and Bank of America are both in line with a trend toward downsizing and trimming staff with digital banking in mind. Since 2009, the New York-based Citigroup’s direct staff has declined 32 percent. Bank of America’s headcount has declined about 27 percent since 2009.

The neighborhood surrounding the Marengo building due to be vacated is vastly different from when Bank of America originally leased the space in 1974, when Old Pasadena was synonymous with urban grit and decay.

Boyd, a Tri-Cities real estate veteran, described Old Pasadena in the 1970s as “hideous” and littered with “junky, dive retail establishments.” He recalled how clients would hang up on him when he suggested Old Pasadena for office space.

Pasadena has since transformed into a destination, rather than a Los Angeles suburb.

The city has become a hub for shopping, finance, and tech, helped by the presence of California Institute of Technology and other educational institutions (see related story on the Art Center College of Design, page 1).

“The cities have become kind of their own downtown.”