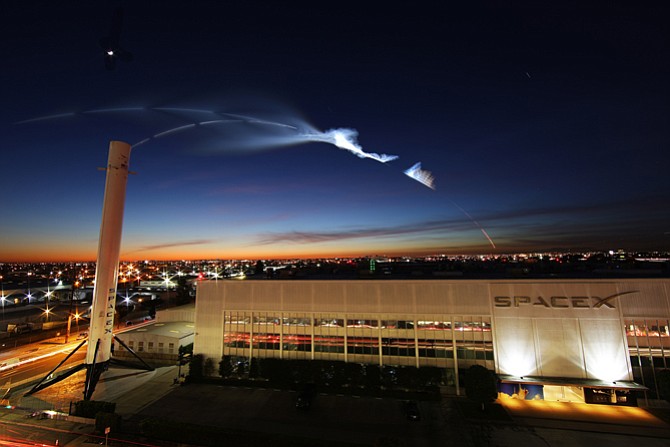 A lawmaker whose district includes an aerospace cluster in the Antelope Valley wants to strike down a tax regimen on space launches that was crafted last year by state officials working in collaboration with Hawthorne-based Space Exploration Technologies Corp., or SpaceX, and other rocket launch companies.

The proposal would roll back the recently devised tax rule from state regulators that calls on rocket launch companies to pay a per-mile tax on income generated by lifting payloads into space from a launch pad in California.

Assemblyman Tom Lackey, R-Palmdale, has introduced a bill to eliminate all income taxes on space launches throughout California.

Lackey’s chief of staff Tim Townsend said in an email that his boss sees eliminating taxes on space launches as a way to boost the state’s fledgling rocket launch industry. His Antelope Valley district includes a heavy concentration of aerospace companies near Edwards Air Force Base

“California has long been one of the leading states for aerospace, and if we create the right policies, the space industry could be a huge provider of jobs and economic growth in the future,” Townsend said in the email.

To tax or not to tax?

Many companies would cheer a plan to eliminate taxes on their core business.

SpaceX last week had no comment on Lackey’s bill, which would undo much of the effort the company put in last year to urge adoption of the tax plan. The privately held company – which doesn’t disclose financials and employs about 6,000 overall with the bulk at its headquarters in Hawthorne – has expressed an overriding concern about ensuring consistency and certainty in the way commercial space launches are taxed.

The business of space travel in California has taken off only in the last three years as private rocket launch companies have moved to meet demand for various communications satellites.

The state, meanwhile, has had no clear taxation method spelled out for income generated by launches.

Such income can be substantial, with satellite companies and other firms willing to spend tens of millions of dollars to reserve space on a launch vehicle; launch prices for the full cargo space within SpaceX’s Falcon 9 rocket start at $62 million.

The only functioning launch pad in California right now is at Vandenberg Air Force Base in Santa Barbara County. SpaceX has conducted most of its launches to date from Cape Canaveral in Florida, although it’s made increasing use of Vandenberg lately.

Up through last year, the state taxed SpaceX and other private launch companies – chiefly United Launch Alliance, a joint venture formed in 2006 between Lockheed Martin Corp. and Boeing Co. – the way it taxes most income generated by companies, using a complex formula based on payroll and sales generated within the state, among other factors.

Regulators with the state Franchise Tax Board said the standard formula is too difficult to apply to launches where only a small portion of the total flight actually occurs in California’s airspace.

State regulators worked with SpaceX and United Launch Alliance to craft a plan that would tax income from payloads on a per-mile basis. The tax usually applies only to the first 62 miles traveled from the launch pad, which is the generally accepted point where outer space begins and is considered international territory. The plan also reduces sharply the tax on revenue from launches in other states, such as Florida.

SpaceX Chief Financial Officer Bret Johnsen sent a letter of support for the regulation to the state Office of Administrative Law as it reviewed the proposal last summer. Johnsen said the new regulation would be an improvement on tax rules that were “unclear” for the rocket launch industry.

“The proposed regulation provides certainty for us, as well as other taxpayers in the industry, for our California franchise tax filings going forward,” Johnsen wrote in the letter. “The clarity provided by the regulation alleviates the need for taxpayers to seek guidance on a case-by-case basis from the FTB or request relief from the standard apportionment rules in individual petitions.”

The tax proposal received final approval in September, and was generally considered the first tax regimen in the nation specifically tailored to space launches – although it’s a reformulation of an existing income tax, and not an entirely new tax.

Nonetheless, one industry analyst said that California’s approach to taxing space launches is being closely watched by other states.

“What California is doing may be locking the tax down as a certainty and that might be beneficial to companies trying to figure out costs,” said Phil Smith, a senior space analyst with Bryce Space and Technology, a consulting firm in Alexandria, Va.