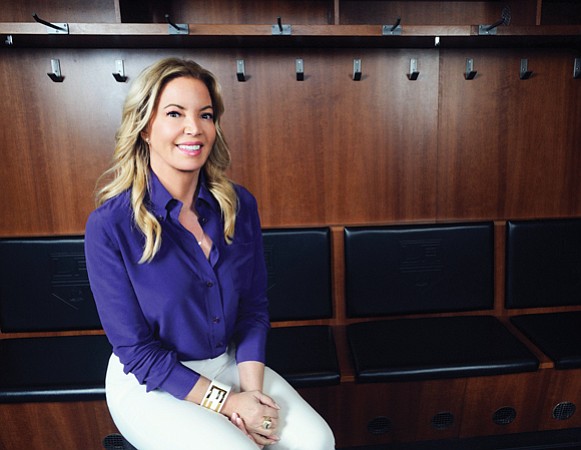 It was just before the start of the season, and a steady drumbeat made its way to Jeanie Buss’ office at the Los Angeles Lakers’ new headquarters and training facility in El Segundo.

It wasn’t all the talk of improving the team’s 26-56 record of last season, or of the promise of its rookie sensation Lonzo Ball.

It was an actual drumbeat – thumping up into her spacious second-floor office overlooking the team’s practice courts as players took part in a shoot around below.

Not in the least, said Buss, the Lakers’ chief executive and controlling owner. It hearkened back to the team’s “Showtime” days at the Forum in Inglewood, where the offices were below the arena and every concert sound check and shoot-around soundtrack reverberated through the executive suite.

This era’s beat carries through the team’s $80 million, 120,000-square-foot headquarters, where Buss called the team well positioned to revive the Showtime feeling that throbbed through the Forum in the 1980s.

It’s too early to tell the Lakers’ progress on the court – social media and talk radio gave the feeling of a team on the verge of going off the rails earlier this month, before a modest winning streak changed the conversation.

Buss has been focused on basketball this season, to be sure, but she’s also looking after the business side of operations – and she shed light on her priorities during that talk at the El Segundo HQ back on the brink of the season.

The complex financial relationships with the National Basketball League make connecting with the community a key to a healthy bottom line for the Lakers.

There are limits to what the Lakers or any NBA team can do to extend its brand. The league allows its franchises to strike licensing deals in their home markets but controls the logos and marks beyond that – which means Buss and her colleagues on the business side have to look for other ways for the brand to bring local dollars.

A big example came when the Lakers struck on selling the naming rights to the new headquarters in El Segundo to UCLA Health, which agreed to pay the team $4 million a year – just about enough to cover forward Julius Randal’s annual salary – for five years.

UCLA Health gets its name emblazoned on the center and operates a 2,500-square-foot sports performance center at the building. The UCLA center is open to the public but separated from the team facility.

The Lakers have set up shop in the new, high-tech headquarters at a pivotal time for the L.A. sports scene.

The market is more crowded than it has ever been, boasting two NBA teams, a pair of professional soccer teams, the National Hockey League’s Los Angeles Kings, Major League Baseball’s Los Angeles Dodgers and, suddenly, two National Football League teams. Added to the mix is a booming e-sports market that has seen a tournament sell out at Staples Center.

And the advent of e-sports has not only captured the imagination of younger fans, it has brought NBA personalities into its ownership circle: Peter Guber, a co-owner of the Golden State Warriors, has a stake in local franchise Team Liquid and former Lakers star Rick Fox is a partner in e-sports team Echo Fox.

That adds to the noise already bouncing round the market, and potentially complicating the effort to appeal to fans, even for one of the best-known, highest-profile franchises in sports.

Buss is nevertheless unfazed by the upswing in sports offerings in town.

“I don’t think it means the more e-sports is popular, the less the Lakers are popular – I don’t look at it that way,” she said. “It’s a great opportunity for people who want to own a team to get involved in sports and gaming. It’s not going to cause the Lakers to be passé.”

The Lakers may not be passé, but there is no doubt they compete for eyeballs not only with events no one conceived of a decade ago but also with the distractions that come from smartphones.

Buss takes the challenge of technology as an opportunity.

“As we get more and more isolated because of our smartphone, as we have the ability to order from home because you don’t need to go to a store – what is going to keep us together?” she asked. “Social time, face-to-face time, connecting with like-minded people. It’s going to be events, and sports really hits the mark for that.”