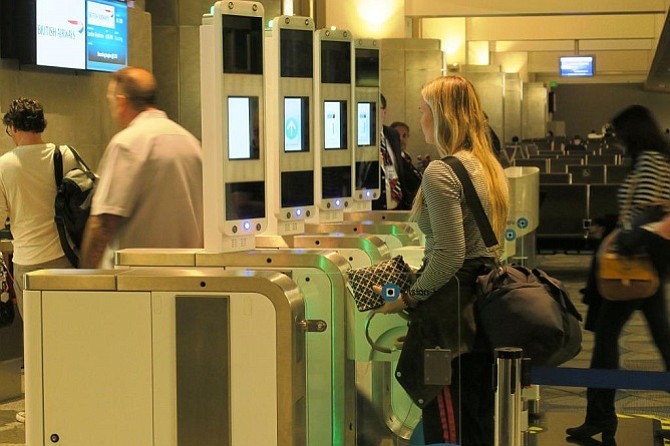 There’s a new way to board a British Airways flight at Los Angeles International Airport – with your own face.

Three self-service, biometric “e-gates” for the airline now use facial recognition technology to get passengers on board without the use of paper boarding passes.

“Biometric boarding…merges two of our highest priorities – improving the guest experience and enhancing security and safety for all those who travel through or work at LAX,” said Los Angeles Airport Commissioner Gabriel Eshaghian.

The pilot program was launched in late December by LAX, British Airways, U.S. Customs and Border Protection and Portuguese company Vision-Box, makers of self-service biometric-based solutions to airports and airlines.

Each passenger’s photo is captured by the e-gate system and then sent to CBP for matching to the digital photo captured at the initial immigration process, airport officials said. To get approved, passengers stand on a mat, get scanned and wait for the e-gates to open, Pannunzio said.

He said the pilot program was in the midst of collecting data including the time it takes for a passenger to get through, glitches and other elements, he said.

Other airlines at LAX expected to unveil e-gates in the next 30 days include Lufthansa and Qantas.

Manufacturing and trade reporter Shwanika Narayan can be reached at snarayan@labusinessjournal.com or (323) 556-8351. Follow her on Twitter @shwanika.