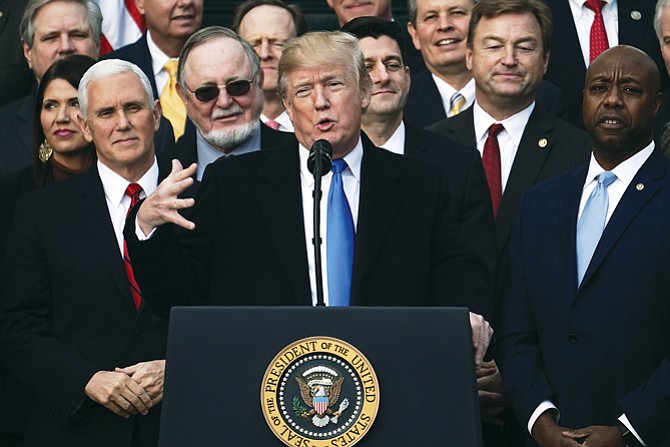 Business continues to chug along in Los Angeles, but that doesn’t seem to matter to Angelenos, who are persistently less optimistic about their outlook on both the local and national economies.

That’s the overview from the quarterly consumer sentiment survey of the L.A. market by the Lowe Institute of Political Economy at Claremont McKenna College. The index for the local economy fell to 92 during the fourth quarter from 95.7 the previous quarter and 113 a year ago.

Angelenos’ confidence levels in the national economy fell by a bit less, with an index reading of 93.7 in the fourth quarter, down from 96.8 in the third quarter. 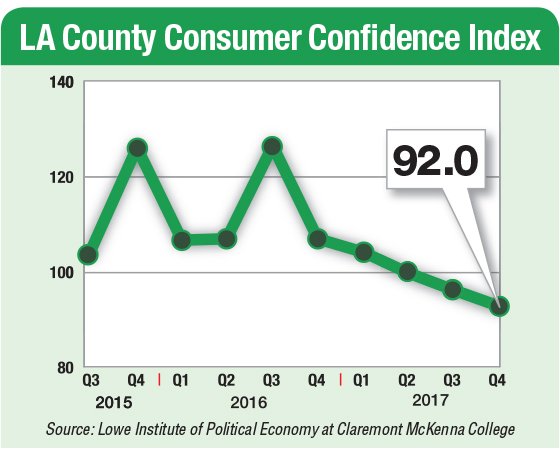 The baseline index reading of 100 was set in the second quarter of 2015 for the index, which debuted last year.

The survey came against a backdrop of a local economy many consider to be at or near full employment, with a jobless rate of 4.5 percent and a record 4.5 million payroll positions. And the recent drop to 92 isn’t indicative of any sharp departure from the steady growth, according to according to Marc Weidenmier, the survey’s author.

Working against upbeat statistics and the relative strength he cited, however, are several factors that appear to figure into the continuing slide of the index, including:

• Fears that the Trump administration will take actions that will harm trade and immigration – two key pillars of the local economy, and;

• A general sense that many in the middle class are being left behind.

Weidenmier was the former Director of the Lowe Institute of Political Economy; he’s now professor of economics and finance at Chapman University in Orange.

The index is the first of its kind for Los Angeles, and one of the first to track consumer sentiment at the local level. It is produced through an alliance between the Lowe Institute and Chapman.

The fourth-quarter reading was from a sampling in December of 500 Los Angeles County residents who answered questions about their current economic situation, their outlook for their own finances and spending in coming quarters, and their outlooks on both the local and national economies.

The December timing of the survey was crucial, since that was the period during which Congress debated and ultimately passed the tax reform package, which President Donald Trump quickly signed into law.

“There was a lot of uncertainty at that time: uncertainty about whether the plan would pass and what the impact would be, particularly in blue-state California,” Weidenmier said. “The reforms have been characterized as lowering taxes for businesses but offering little for the working and middle class, which is reflected in the index. Further, the reduction in state and local tax deductions and the ceiling on the mortgage interest deduction have ramifications for many in this region.”

Weidenmier added that the impact of the tax plan will first be felt in the next quarterly survey in March, just after many respondents are slated to see a hike in take-home pay thanks to a cut in their payroll taxes.

That should give a solid first indicator on whether middle-income respondents will start feeling better about their own financial prospects, he said.

The survey obtains information from individuals, which leaves an imperfect comparison on other benchmarks when it comes to median incomes. The federal government tends to track incomes of households rather than individuals. The U.S. Census Bureau reports that the median household income $59,000 nationally and $57,900 for Los Angeles County.

The December survey found that respondents earning between $35,000 and $50,000 registered a drop of 9 points in consumer sentiment between the third and fourth quarters. The next income bracket down – between $25,000 and $35,000, considered the lower middle class – reported a 20 point drop.

Weidenmier said those declines might be a manifestation of the trend of growing income inequality, also known as the “hollowing out” of the middle class, particularly in California.

“During earlier stages of the recovery (from the Great Recession), those in these two income groups may have been hopeful that they, too, would eventually benefit with better jobs at better pay,” he said. “But now, it’s possible some may have concluded that this is as good as it’s likely to get, that if they don’t have that better job with better pay now, it may not happen for them. That might explain the drop in sentiment.”

That same set of diminished expectations might also be playing a role in the drop of 8 points in sentiment among college-educated respondents, with the added factor of debts on college loans, he said.

Another local economist said the survey’s downward trend in L.A. consumer sentiment is due in part to a mismatch between employers in select industries with openings for high-skilled, well-paying jobs and many middle class residents with different skill sets but not well-paying jobs.

“People in this situation feel like they are caught in this trap, and that may be showing up in the sentiment survey,” said Steven Banks, new chief economist for the Los Angeles County Economic Development Corp.

Weidenmier said he was waiting to see how these two groups would respond to the imminent tax cuts. “As middle income groups get more cash in their pockets, will it move the needle on sentiment?” he said.